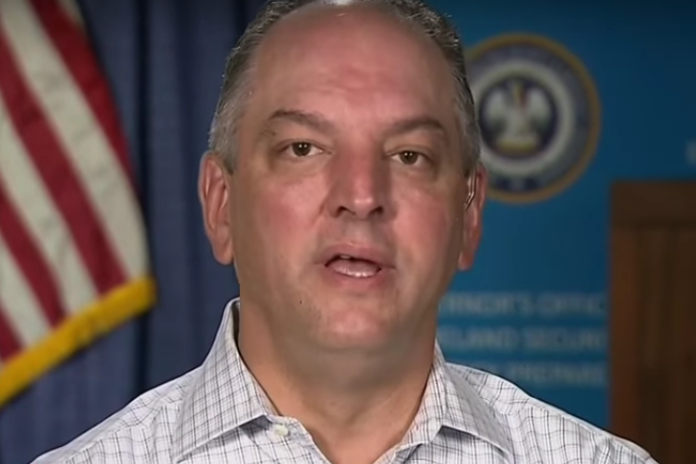 Louisiana Governor John Bel Edwards (D-La) signed away all future Democratic support when he signed a draconian anti-abortion bill into law on Thursday.

The “fetal heartbeat” law bans women from seeking an abortion after six weeks. The bill passed the Republican-controlled state legislature, but rather than veto it, Edwards committed career suicide by signing it instead.

Edwards ran as a pro-life candidate in 2015, but signing such a bill that strips women of their rights as Republicans move to challenge Roe v. Wade in state after state is a cardinal sin that cannot be forgiven, especially since the bill he signed is not supported by science and will result in desperate women risking their own lives by seeking back-alley abortions. Most women don’t even know they are pregnant until after six weeks.

The bill also does not contain any exceptions for rape and incest victims, which means rapists can force their victims to give birth. Edwards’ betrayal of the Democratic Party and women just emboldens Republicans, who have already passed several other draconian anti-abortion laws in other red states.

Needless to say, his fellow Democrats are condemning him.

I’ll say it again: In this political climate, I will only support Democrats for office who will defend a woman’s constitutional right to an abortion. https://t.co/9IAEUEOVl0

Dangerous attacks on women’s constitutional right to an abortion are outrageous no matter what party you’re in. My message to the Gov. of Louisiana: women have agency, women have value, women have authority to make decisions about their own lives—and we will not go backward. https://t.co/oi7vgy90ej

Regardless of your personal beliefs, no politician—Republican or Democrat—has the right to control women’s bodies or involve themselves in women’s health care decisions. Governor John Bel Edwards is turning his back on Louisiana women by signing this shameful bill. https://t.co/PdObQ2JZCT

I don’t agree with @LouisianaGov John Bel Edwards’s decision. In CO, we empowered women to make their own decisions with affordable birth control. The results speak for themselves – teen abortions down 64%, teen pregnancy down 54%. As President, I’d take that program nationwide. https://t.co/AbP8ghAOO3

The Democratic governor of Louisiana is signing draconian anti-abortion legislation today. This is an outrage. Regardless of party, we must vigorously defend a woman’s constitutional right to control her own body. https://t.co/Bv1fcVEuhi

A Democrat signed this monstrosity of a misogynistic bill. A DEMOCRAT. We need to overhaul our party.#Louisiana #StopTheBans https://t.co/s3mrlFrapn

Edwards has done lots of good in Louisiana, but this one act erases that record because women are being treated as second class citizens and their lives are more at risk now. You either stand for women or you are against them. And Edwards is clearly against them and violated a major platform plank of the Democratic Party. If he’s going to act like a Republican, he might as well put an (R) next to his name.