In the wake of President Donald Trump’s racist attacks on four Democratic congresswomen of color, including Rep. Alexandria Ocasio-Cortez (D-N.Y.), a Louisiana police officer is openly calling for her to be shot and killed in a social media post.

Gretna police officer Charlie Rispoli disgraced the uniform he wears and the department he works for this week by reacting in a violent way toward a satirical article about Ocasio-Cortez.

“This vile idiot needs a round, and I don’t mean the kind she used to serve,” Rispoli wrote in response, referring to her past work as a bartender.

He then insults her intelligence by writing that she has the “IQ of a Chicklet.” 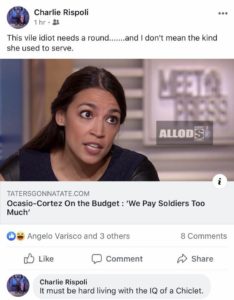 The remarks come as Trump continues his racist attacks against Ocasio-Cortez and the other members of The Squad, including Reps. Rashida Tlaib (D-Mich.) Ilhan Omar (D-Minn.) and Ayanna Pressley (D-Mass.).

A conservative writer already fears that Trump’s racist attacks will lead to something worse, and Rispoli’s call to shoot Ocasio-Cortez is just another step in that process, and one that Trump enabled.

Gretna Police Chief Arthur Lawson told NOLA that Rispoli’s behavior is unacceptable and will not be tolerated.

“I’m not going to take this lightly and this will be dealt with on our end,” Lawson said. “It’s not something we want someone that’s affiliated with our department to make these types of statements. That’s not going to happen. Whether you agree or disagree with the message of these elected officials and how frustrated you may or may not get, this certainly is not the type of thing that a public servant should be posting.”

“We do everything that we can through this department to train our officers to try to make them understand that when they do something like this, the impact is greater than the average citizen,” he continued.

Rispoli has taken down the vile post and his account has been deleted, but that shouldn’t save his job. He is supposed to protect and serve. His remarks only put Ocasio-Cortez in danger and any cop who puts someone in danger doesn’t deserve to wear the badge.

I don’t believe the four Congresswomen are capable of loving our Country. They should apologize to America (and Israel) for the horrible (hateful) things they have said. They are destroying the Democrat Party, but are weak & insecure people who can never destroy our great Nation!

If an act of violence happens to one of these women because of his attacks, Trump should be charged as an accessory and an instigator.