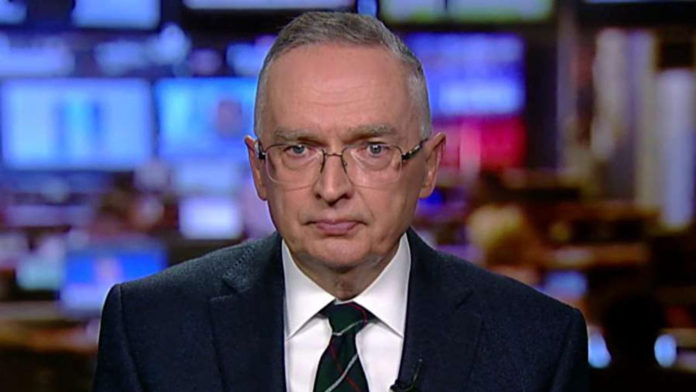 Former Fox News analyst Lt. Col. Ralph Peters predicted that President Donald Trump is so desperate to win the 2020 Election to keep himself out of prison that he may seek foreign help again.

The Mueller report outlines several instances of obstruction of justice Trump committed to undermine the investigation into Russian interference with the 2016 Election. Trump is also being investigated for multiple other crimes by state and federal prosecutors. And he has already been implicated in campaign finance felonies.

The only thing keeping him out of prison right now is that he occupies the White House.

But if he loses in 2020, Trump faces years behind bars, which is why Peters believes that Trump will not only be desperate for further foreign help to win again, he’ll likely refuse to leave office if he loses.

“I believe that Donald Trump is looking forward to 2020,” Peters began during an interview with Anderson Cooper Wednesday night. “I mean he can read the poll numbers. He’s not doing well. His negatives are very, very powerful. And if the Democrats don’t self-destruct, which they are perfectly capable of doing, he’s going to be out of office in early 2021.”

“If he doesn’t win re-election, there’s not just a new president, Anderson, there’s a new Attorney General, there’s a new Secretary of the Treasury, a new director of the IRS, perhaps a new director of the FBI. And once he is out of office, the senators can’t help him, even if the Republicans maintain the majority in the Senate. He’s going to be in the hands of the courts. If he’s not in prison, he’ll be in the courts for years.”

In fact, Peters opined that the reason Trump is refusing to do anything to stop future election interference is because he wants foreign nations to help him win again so he can’t be arrested or imprisoned.

“I really believe that Donald Trump is stonewalling on taking effective measures to protect our electoral system because he wants Russian help,” Peters concluded. “He’d take Chinese help. He’d take help from Albanian folk singers. He is desperate to win. By the way, if he doesn’t win in 2020, you’re going to see the ugliest departure from the White House in American history.”

So, it’s not just his ego. Trump is frightened of going to jail where he belongs, so he’s hoping to win re-election by hook or by crook in order to escape justice. Refusing to leave the White House after losing would create a constitutional crisis, especially if Trump tries to declare the results of the election invalid and accuses his Democratic opponent of rigging the election. It would be just one more slap in the face of our democracy before he’s dragged out kicking and screaming like a whiny baby before he’s fitted for the handcuffs and orange jumpsuit he deserves.