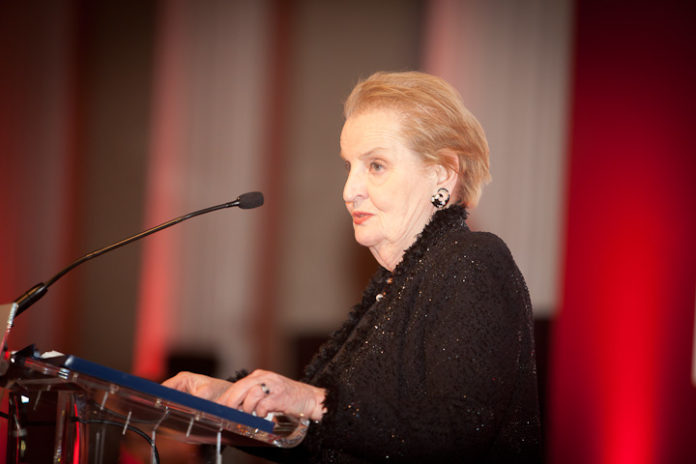 President Donald Trump played right into the hands of Russian dictator Vladimir Putin this week as usual by withdrawing from a Cold War treaty preventing either nation from developing intermediate range nuclear missile technology, and former Secretary of State Madeleine Albright had plenty to say about it.

Trump withdrew the United States from the Intermediate Range Nuclear Forces treaty of 1987 on Friday, resulting in Putin doing the same and publicly ordering the development of new nuclear weapons systems.

Critics of Trump’s action had warned that U.S. withdrawal is exactly what Putin wanted all along because now he doesn’t have to hide what he’s doing and since Trump neutered the treaty and the mechanism within it to bring Russia in line, Russia is no longer violating it.

And Trump’s decision comes on top of lifting sanctions against Russian companies connected to Putin, attacks against NATO, throwing our intelligence community under the bus by denying Russian involvement in the 2016 Election, his decision to pull American forces from Syria and private talks with Putin that Trump has desperately sought to keep secret. Even Trump’s trade war with China has directly benefited Russia.

During an interview with Salon, Albright addressed a more aggressive Russia and criticized Trump for giving foreign policy gifts to Putin that strengthen his weak hand:

“I think that what it is doing is undermining democracies for the sake of separating them from the United States and from each other,” Albright said of Putin’s strategy. “It’s kind of weaponizing information, and what sometimes is called asymmetrical warfare, in terms of making sure that our alliances are weakened and that the democratic institutions in those countries are under pressure and threat.”

Indeed, Putin is intent on bringing down NATO, and Trump has only aided that goal by attacking our allies at every turn.

“I think some of the statements and things that President Trump says and does in reaction are gifts to Putin, if I might put it that way,” Albright continued. “It is kind of helping in an agenda, whether it’s done on purpose or mainly because of President Trump’s own views towards alliances and the validity of our relationships with some of our friends.”

And that’s not only undermining our foreign policy, it undermines our national security.

“I think that it definitely complicates how we carry out policy,” Abright concluded. “I was very surprised by what I saw on TV and what I’ve read so far. The way that the intelligence community sees the threat and the way that Trump is carrying out policy, I mean, it is really a disconnect. I’ve now decided the simplest way of putting this in answering your question is, Putin is playing a weak hand very well and we are playing a strong hand poorly.”

Trump is a liability and a national security threat. There’s no other way to put it. Even if he’s just unwittingly playing into Putin’s hands instead of being Putin’s witting agent, he’s still doing things that put our country at risk of being undermined by Russia around the globe. He’s clearly compromised and Senate Republicans need to acknowledge this and do something about it. If that means impeaching Trump, so be it. At least we can still fix the damage he has caused. The longer he remains in office, however, that won’t be true for much longer.