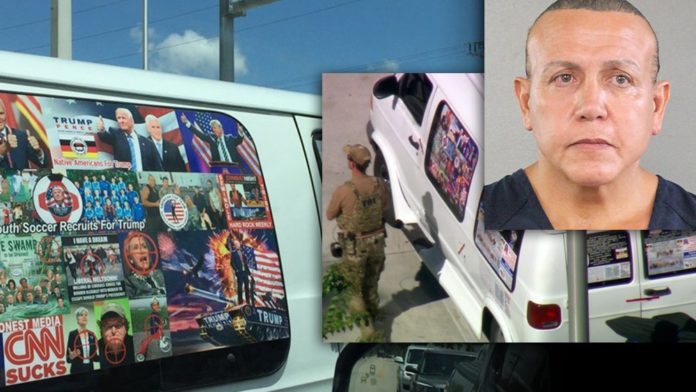 Cesar Sayoc, the 57-year-old acolyte of President Donald Trump who mailed pipe bombs to major Democratic figures, including former President Barack Obama and 2016 presidential candidate Hillary Clinton last November, is claiming in a court filing that Trump’s angry, sometimes violent political rallies were like a “new found drug” for him, and inspired his hatred of those who oppose the current president.

Sayoc, who became known as the “MAGA bomber,” pleaded guilty in March to mailing 16 devices of mass destruction, said in a letter to U.S. District Judge Jed S. Rakoff that he didn’t intend to hurt anyone and took his actions to “tone down the liberal left violence platform. And he added that he had never been a political person until he began seeing stories about Trump on his Twitter feed. Sayoc then began attending Trump rallies, where he would witness:

“The first thing you see… entering Trump rally is we are not going to take it anymore, the forgotten ones, etc. You meet people from all walks [of] life… it was fun, it became like a new found drug.”

In that same letter, Sayoc claimed he had used steroids for over 40 years and was abusing them heavily at the time he mailed the pipe bombs.

Now facing life in prison, Sayoc is following in the long line of Trump-supporting extremists who have carried out or attempted to perpetrate acts of domestic terrorism in the name of Donald Trump. The Daily Beast noted in an article published Wednesday that another Trump devotee, Matthew Haviland of Rhode Island, was just charged for threatening to kill and eat a college professor and also had a plan to “eradicate” Democrats.

And ThinkProgress reports that attorneys for a Kansas militiaman, Patrick Stein, wrote in a sentencing memo on behalf of their client that he too had been radicalized by Trump’s violent proclamations:

“The court cannot ignore the circumstances of one of the most rhetorically mold-breaking, violent, awful, hateful and contentious presidential elections in modern history. Trump’s brand of rough-and-tumble verbal pummeling heightened the rhetorical stakes for people of all political persuasions.”

Trump has repeatedly denied that his angry rhetoric has any effect on those who hear it, but former federal prosecutor Glenn Kirschner, says that’s simply not true:

“It’s laughable that people are trying to separate the two things in saying there is no relationship between what the president urges his supporters to do and what his supporters then do. Anybody who says there is no connection, I think is saying it for political or ideological reasons.”

Since he was elected, counties in the U.S. that hosted a Trump rally in 2016 saw a 226% increase in hate crimes. That certainly seems suggest a cause and effect, don’t you think?

Cesar Sayoc and others like him have indeed been spurred to hatred and violent acts by Trump. That’s one of a million reasons the current president needs to be removed from office — either via impeachment or at the ballot box in 2020.