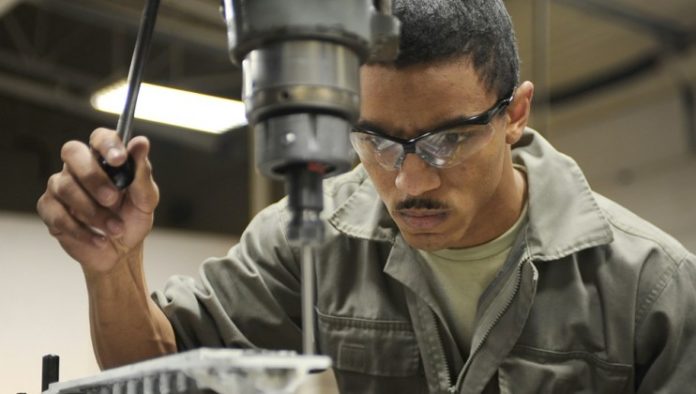 Despite President Donald Trump’s promises that he would revive the manufacturing sector of the U.S. economy, and his recent assurances that the American economy is not on the verge of recession, new data shows that manufacturing has contracted for the first time in a decade, according to CNBC:

The U.S. manufacturing PMI (purchasing managers’ index) was 49.9 in August, down from 50.4 in July and below the neutral 50.0 threshold for the first time since September 2009, according to IHS Markit.

Any reading below 50 signals a contraction. The survey is an initial reading for the month of August. The final figure will be released Sept. 3.

Tim Moore, economics associate director at Markit, had this to say about the manufacturing numbers:

“Manufacturing companies continued to feel the impact of slowing global economic conditions. August’s survey data provides a clear signal that economic growth has continued to soften in the third quarter.”

In the early days of the Trump administration, manufacturing had indeed seen an uptick in activity, but the president’s increasingly punitive trade and tariff war with China is taking a toll on the sector.

Not long after the data was released, U.S. stock indexes fell and the yield curve — a longtime predictor of recessions — inverted yet again, suggesting that there are dark days ahead for the U.S. economy.

“The most concerning aspect of the latest data is a slowdown in new business growth to its weakest in a decade, driven by a sharp loss of momentum across the service sector. Survey respondents commented on a headwind from subdued corporate spending as softer growth expectations at home and internationally encouraged tighter budget setting.”

Business activity growth has also shown recent signs of softening, according to CNBC:

The recent spate of bad economic news is especially worrisome for the Trump administration as he seeks a second term in office. Some political experts believe the president cannot possibly win reelection if the one bright spot on an otherwise rocky presidential record goes south.