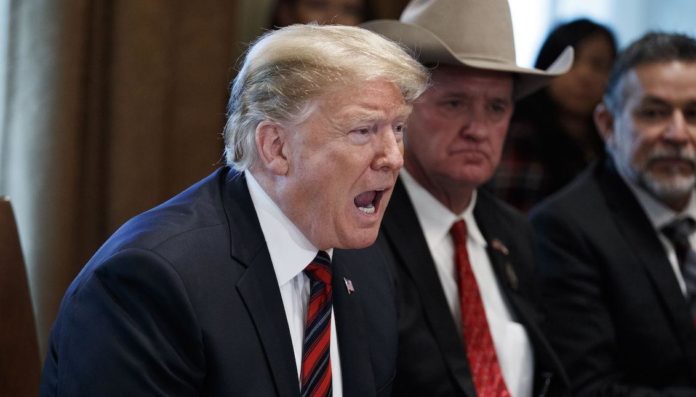 Alfreda Dennis-Bowyer is a USDA meat inspector in Delaware who is owed approximately $9,000 in back pay the federal government owes her as a result of the 35-day shutdown President Donald Trump caused as a result of Trump’s demand for billions of dollars in taxpayer money for his border wall.

Dennis-Bowyer’s most recent paycheck, however, was only for $250, and that has her wondering how long she’ll have to wait for what she’s owed:

Thousands of federal workers are asking the very same questions as they continue to wait for money they were promised when the shutdown ended weeks ago.

Why the delay? In some cases, it’s because employees are unable log on to agency networks. Their passwords expired over the course of the shutdown.

David Verardo, president of AFGE Local 3403, which represents employees at the National Science Foundation and other agencies, told the Washington Post:

“People are fatigued by the shutdown. They’re demoralized to some extent.”

And yet another shutdown could be on the horizon as soon as next week, with a White House spokesperson warning that Trump is “on the verge” of sending employees home next Friday if he doesn’t get what he wants in the spending bill currently being hammered out by a bipartisan group of legislators.

Hopefully that won’t happen. Reports are that compromise legislation to avoid a second shutdown is progressing. CNBC reported Friday:

“Alabama Sen. Richard Shelby, the top Republican negotiator on a conference committee trying to keep government running past Feb. 15, said Thursday that he expects a deal on border security funding by Monday. Shelby, chairman of the Senate Appropriations Committee, made the comments after briefing President Donald Trump on the talks.”

But just because the group is able to reach an agreement, there’s no guarantee Trump would sign the bill:

“It is unclear whether Trump will back an agreement lawmakers reach. The president has repeatedly pushed for Congress to approve $5.7 billion to build his proposed border wall. Democrats have refused, but shown willingness to pass funds for other security measures such as technology, more personnel or repairing existing fencing.”

As usual, Trump’s ego may wind up costing nearly a million people their paychecks and livelihood.