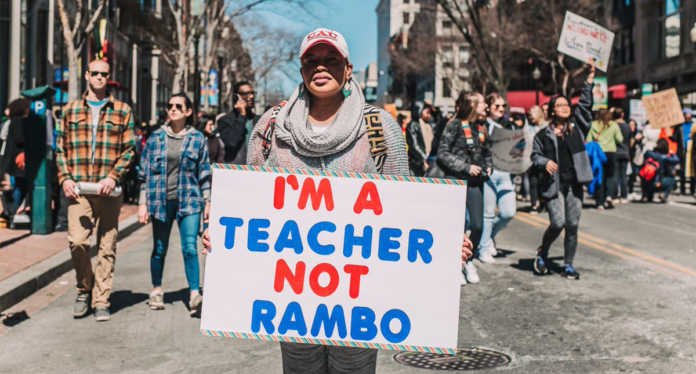 The March for Our Lives rally on Saturday was astonishingly successful, organized by high school kids and backed financially by benefactors like Oprah and George Clooney. In just six weeks, the survivors of the school at Marjory Stoneman Douglas High School combined their efforts with sister marches all over America. Photos of the creativity that poured out in the protest signs are all over the internet. We picked out some of the best signs from the participants in rallies across America.

It turned out, both young and old turned out for the march. The Washington Post says that surprisingly only 10 percent of the participants were under 18, while the average age in the crowd was just under 49 years old, similar to the age of participants at the Million Moms March in 2000.

Judging by the signs, the crowd was well-armed with wit, grammar, facts, awareness, and a biting sense of humor.

The faces of the young and old really capture the message: Americans get it. They know the NRA has overplayed its hand in controlling the Congress. They know that the lives of our children matter immeasurably more than the sales of assault rifles.

They know what comes next, and that’s voting out politicians who fail to represent the people, instead prioritizing their contributions from the ever-more extremist NRA.

The voices of Blacks were loud and powerful. As one of the groups most disproportionately likely to be affected by gun violence, and also mostly ignored by the media, they deserve a much louder platform.

The faces of children like these kids really tell us exactly what is at stake and why we can’t fail to stop gun violence.

Best Signs by Youth from the Raleigh #MarchforOurLives | The National Center for Social Impact https://t.co/5TD1GQeqqS pic.twitter.com/hxTq41Z3gG

This is the best sign I’ve seen from #MarchForOurLives. pic.twitter.com/5nr86J5hJC

I've seen a lot of very good #marchforourlives signs, but this might take the cake for best sign-holding *device* pic.twitter.com/NoL89oUORC

Best sign ever. Her sign says: “More hugs, less guns. I love you. I love so much. Love. We are made of love.” #marchforourlives ❤️????❤️ pic.twitter.com/4wVcnzS7qG

But wise old people were there celebrating the initiative and leadership that the younger generations have shown.

Some older people weren’t holding back what they thought of the gun nuts.

And even man’s best friend got in on the act:

The best sign I’ve seen yet at the #MarchForOurLives rally in Woodcliff Lake @northjersey pic.twitter.com/dOJXIsk1pQ

A great many of the signs were clever, heartfelt, correctly spelled, and all sent a powerful message.

Here are the best, cleverest, most powerful signs from #MarchForOurLives https://t.co/roGJt2VZSO pic.twitter.com/ndCywiWA2Z

Women were out in force once more, and they had plenty to say:

Some of the best signs from #MarchForOurLives in #WashingtonDC #NeverAgain #2018Midterms

The subject of gun violence is horrific, but protesters managed to take on the subject effectively and artfully, pointing out the real problem: An apathetic and unmoving Congress.

For those of you Americans out there, this could be the best sign I’ve seen from the #MarchForOurLives protests worldwide. #NeverAgain #FuckTheNRA pic.twitter.com/pXYqmzPMDv

Many of the signs took aim at President Trump, who received millions in campaign ads from the NRA.

#MarchForOurLives possibly the best sign at one of the many rallies! pic.twitter.com/QiXhcpVipQ

Some Republicans turned out to protest as well: A sign we all would like to see more of.

Many people commented on how awesome the signs were in cities across the country.

Next to the students and amazing, peaceful crowds, the signs were among the best things about #Marchforourlives.

Our signs were clever, thought-provoking, heartfelt, grammatically correct and devoid of spelling errors.

Some made sure to point out the problem with white terrorists, something it seems many on the right would rather conveniently ignore.

One of the best signs I saw yesterday ✊?✊?✊?#MarchForOurLives pic.twitter.com/d7S4GOgENt

Many people noted the disparity between support for the 2nd Amendment and support for women’s equality among conservatives.

Others noted the hypocrisy on display from conservatives who like to think they are devout, but appear to be following a warped version of religion:

One of the best signs seen at the #MarchForOurLives in Parkland pic.twitter.com/dB1JmaXw82

The hypocrisy of the so-called “pro-life” crowd got called out too:

This is the best sign I've seen from #MarchForOurLives since you're pro-life, how about caring for these children in these schools. ?? pic.twitter.com/8cCxDUbJrc

The enthusiasm of the diverse people carrying signs was inspiring.

Not pithy by any means, but definitely one of the best signs I spotted at the New Orleans #MarchForOurLives pic.twitter.com/MaH4CnFVGy

Other signs got their point across with sarcasm and biting humor.

This extra-large sign made it very clear: It’s not a political issue inasmuch as it is a moral issue.

Finally, the teachers out there were grading Trump on his response so far, and it’s not pretty. They certainly didn’t think arming teachers was such a great idea.

For more, see the video about the many strong female voices leading the protests below. They sure do give us hope that the momentum for gun reform will carry forward to the November mid-terms, and that’s when the real change can finally begin!

‘Fight for your lives, before it is someone else’s job.’ — These girls are the future #MarchforOurLives pic.twitter.com/MrWFBpydZX