The United States Blues
Home News Marco Rubio gets busted for hypocrisy after 2012 video surfaces of him... 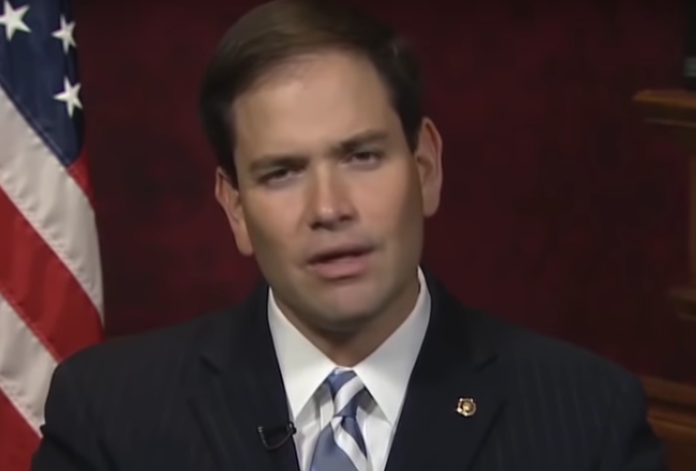 Senator Marco Rubio (R-Fla.), like many Republicans who have become shills for President Donald Trump, has been revealed as a hypocrite when it comes to Attorneys General who are held in contempt of Congress.

The House recently voted to hold Attorney General Bill Barr in contempt for refusing to comply with a subpoena requiring the release of the full unredacted Mueller report and the underlying evidence presented to the grand jury, something Barr can easily do. But he refused because he is desperately trying to protect Trump from facing the consequences of a damning report that outlines multiple instances of obstruction of justice.

In fact, Barr has even lied to Congress during testimony about the report.

There have been several demands for Barr to resign or be impeached. And it turns out that even Rubio has called for an Attorney General to resign for being held in contempt.

Back in 2012, Attorney General Eric Holder was held in contempt by a Republican Congress over his resistance to turning over documents pertaining to the Fast and Furious operation that resulted in many firearms disappearing and ending up in the wrong hands.

At the time, Rubio went on television and demanded Holder resign.

“No one can be above the law, not even the attorney general,” Rubio said. “I think an attorney general held in contempt of Congress is someone who should resign. I think it is outrageous that any attorney general, Republican or Democrat, refused to comply with Congress’ constitutional right to hold them accountable and the Justice Department accountable. I would say that if this was a Republican.”

Except that Barr has been held in contempt now and yet Rubio is not making the same demand. The fact is that there’s a double standard among Republicans. If it’s a Democratic administration they will demand resignations and impeachments but a Republican administration can get away with anything.

Of course, when conservative writer Bill Kristol pointed out his hypocrisy, Rubio attempted to slither out of it by comparing Barr and Holder.

If like Eric Holder William Barr ever authorizes a program like #FastandFurious that gives drug dealers guns subsequently used to kill a U.S. agent,lies about it & then refuses to provide Congress information, he should resign. https://t.co/qqjdP3VdSL

The problem is that Barr’s actions are far worse. He is literally shielding Trump and helping him defy oversight by Congress. Contempt is contempt and Rubio clearly made no distinction in 2012. He clearly stated that “any attorney general” who refuses to comply with oversight efforts should resign.

Those words have now come back to bite him on the a**.