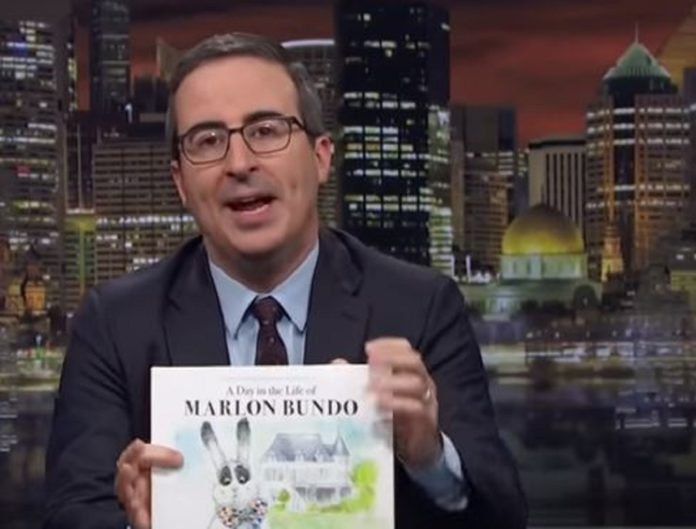 Vice President Mike Pence does not support gay marriage, but John Oliver does. Who would have thought that the world of children’s books would become a national battlefield for gay marriage? Probably no one. But it has.

The story begins with Pence’s daughter Charlotte, who wrote a children’s book about the Pence family pet, Marlon Bundo. Marlon is a bunny. A cute little white bunny with gentle black markings.

Pence’s wife Karen illustrated the book. According to the Amazon write up:

“So how does a bunny experience a day in the life of the Vice President? Now young readers can follow Marlon Bundo along as he hops after ‘Grampa’ (Vice President Mike Pence) in this delightful story penned by Charlotte Pence and illustrated faithfully with watercolors from the ‘Second Lady’ herself, Karen Pence.”

Pence’s book, Marlon Bundo’s Day in the Life of the Vice President, has received a number of good reviews commending the story-telling and the illustrations.

The Pences’ will be donating a portion of the profits from the book will be going to non-profit organizations. The charities focus on combating:

So, kudos for that at least.

With its message of tolerance and advocacy, this charming children’s book explores issues of same sex marriage and democracy. Sweet, funny, and beautifully illustrated, this book is dedicated to every bunny who has ever felt different.

While the subject of the parody may be against the views of the vice president, Charlotte doesn’t seem to be offended by it at all.

During an interview on Fox Business Network with Maria Bartiromo, Karen stayed quiet, but Charlotte said:

Last Week Tonight has designated The Trevor Project and AIDS United as their charities, with 100 percent of all profits being donated. Both books are vying for top slots on the bestseller lists, with the Olivier parody slightly edging out the Pence book for first place.