The United States Blues
Home News Matt Gaetz gets humiliated after shouting his conspiracy theories at Mueller during... 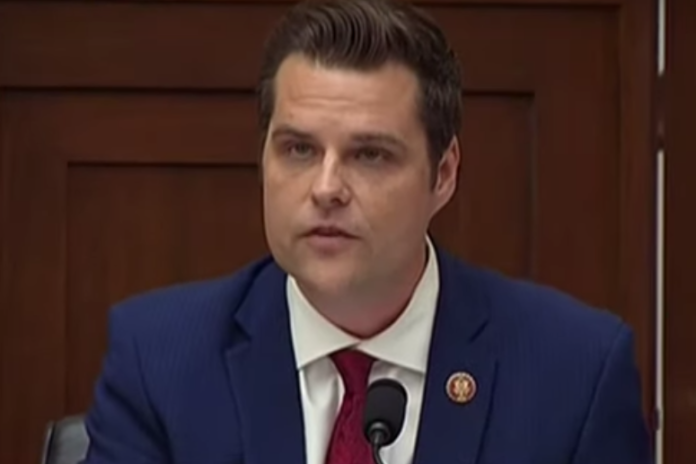 Mueller had been advised by the Justice Department not to discuss the Christopher Steele or the Steele dossier he put together on Trump because of ongoing investigations.

He even told the committee that he could not discuss those topics because he’d been told not to do so, but Gaetz and other Republicans apparently were not listening.

Rather than ask Mueller questions that he can answer, Gaetz spent his time spouting GOP conspiracy theories about the dossier, including that Steele’s Russian sources lied to him or that Steele lied to hurt Trump, and yelling at Mueller for not giving him the answers he wants to hear.

“If Russians were lying to Steele to undermine our confidence in our duly elected president that would seem to be precisely your purview because you stated in your opening that the organizing principle was to ‘fully and thoroughly investigate Russia’s interference,'” Gaetz said. “But you weren’t interested in whether or not Russians interfered through Christopher Steele, and if Steele was lying, you should have charged him with lying as you have charged a variety of other people but you’ve said nothing about this in your report.”

Here’s the full video of Gaetz’s rant via YouTube.

In short, Gaetz basically flung sh*t throughout his five minutes of questioning in a blatant effort to smear Mueller and discredit the Russia investigation.

Twitter users found the whole disgraceful episode embarrassing and proceeded to humiliate him.

Matt Gaetz is 30 seconds away from mentioning the Illuminati and the lizard people.

If you want to see how far America has fallen, you need look no further than professional scumbag Matt Gaetz lecturing and attacking decorated American hero Robert Mueller.

Why is every Republican screaming at Mueller’s hearing?

Jim Jordan’s flop-sweat, Gaetz, Collins, and Gohmert with their conspiracy theories. I’m half expecting one of them to start talking about Area 51.

52/ There is zero—*zero*—*zero*—evidence that former MI6 Russian desk chief Christopher Steele was working for the Russians. *Zero*—*zero*. The very suggestion is deeply offensive and it’s pretty sick that Matt Gaetz (R) is splattering this nonsense across our television sets.

Rep. Matt Gaetz is all the evidence needed to prove that America is not a meritocracy.

Matt Gaetz thinks because he is yelling, he makes sense. #MuellerHearings

Seriously, is Gaetz not aware that DOJ is running these other probes and that DOJ has advised Mueller not to talk about any of it? #muellerday

Matt Gaetz is the equivalent of all caps tweeting.

This was nothing but a show for Trump by Gaetz, who has zero credibility, especially since he once threatened Trump’s former lawyer Michael Cohen in a scheme to keep him from testifying. It’s clear that he’s not interested in the truth and that he will do anything to protect Trump, even desperately shout debunked conspiracy theories.