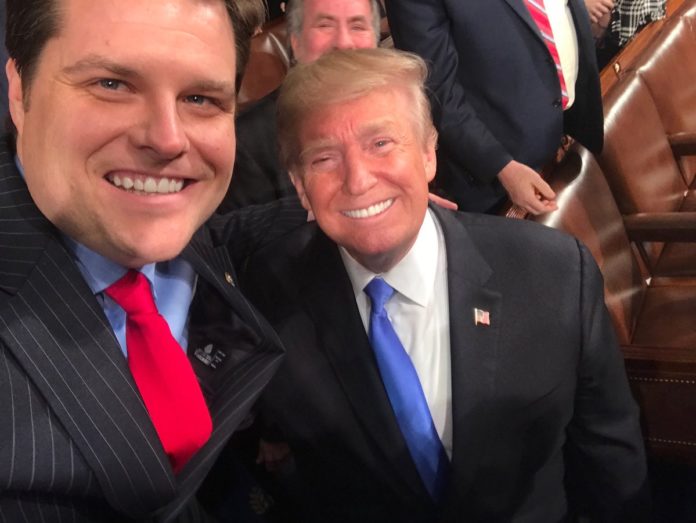 The threat issued by Rep. Matt Gaetz (R-FL) in the eve of testimony from President Donald Trump’s personal attorney, Michael Cohen, may have been done at the personal behest of the president himself.

Edward-Isaac Dovere of The Atlantic reports that he overheard a phone conversation between Gaetz and Trump, who called the Florida congressman from Hanoi, where he was meeting with North Korean dictator Kim Jong Un:

President Trump called @mattgaetz last night from Hanoi to talk the Cohen testimony and the threats (since rescinded) Gaetz made about Cohen.
“I was happy to do it for you. You just keep killing it,” Gaetz was heard telling him.
(Gaetz told me he doesn’t discuss calls w/POTUS)

Gaetz’s tweet, which he posted and later deleted, is being investigated by the Florida Bar Association. In it, Gaetz suggested he was prepared to reveal alleged marital infidelities by Cohen. Many suggested the tweet crossed the line into witness intimidation, which is illegal under both federal and state law.

The Florida congressman later apologized for his tweet, commenting:

I’ve personally apologized to @MichaelCohen212 4 referencing his private family in the public square. Regardless of disagreements, family members should be off-limits from attacks from representatives, senators & presidents, including myself. Let’s leave the Cohen family alone.

Reaction to the report from Dovere set off calls Gaetz to be disbarred and censured by the House:

@TheFlaBar threatening or intimidating a witness is against the law. He was not invited as he is not on the committee. He was there for the sole purpose of witness intimidation. He’s an elected official and knows better. He should be disbarred. @CongressEthics

That tweet reeked of Trump. I think he dictated it and Gaetz, as a sycophantic fellator, dutifully posted it and (like Cohen) will take the fall.

This is the real reason Gaetz sent the tweet, to please his “Don”. Gaetz is an evil man, no question about it…

This means that @mattgaetz wont be a #lawyer anymore.