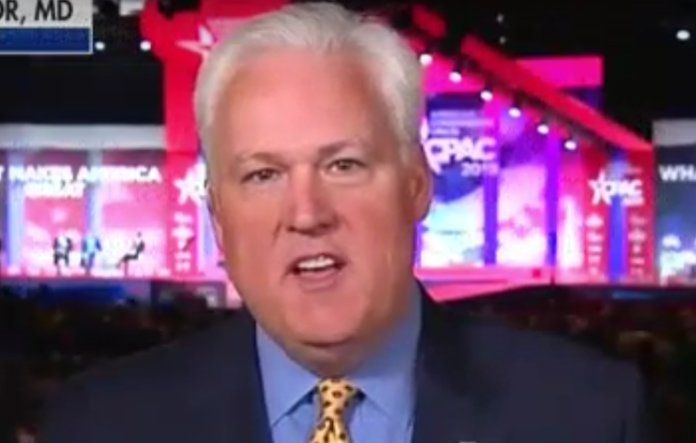 Matt Schlapp, one of President Donald Trump’s top supporters, attacked liberals on Friday during an interview on Fox News for not being tolerant of discrimination against the LGBT community by Vice-President Mike Pence.

Host Sandra Smith played footage of former Vice-President Joe Biden calling Pence a “decent guy,” a statement that has drawn a rebuke from Democrats because Pence supports hate and discrimination against gay people and wants to take away their rights while hiding behind his religion.

Biden would later clarify his remark on Twitter in response to being called out by actress Cynthia Nixon.

You’re right, Cynthia. I was making a point in a foreign policy context, that under normal circumstances a Vice President wouldn’t be given a silent reaction on the world stage.

But there is nothing decent about being anti-LGBTQ rights, and that includes the Vice President.

Schlapp responded by complaining that Americans should be tolerant of Pence and his hateful beliefs.

“It’s the radicalism of what is happening to the Democratic Party,” Schlapp said. “Look, the conservative movement in the Republican Party believes that each American has the right to make their own decisions on how to live their life and the fact is if Mike and Karen Pence are people of faith and want to live out their faith in their own individual lives and with their family, guess what? That’s also protected by the First Amendment.”

Good, then Schlapp and Pence won’t mind declaring in public that LGBT people have the right to live their lives and make their own decisions. Right?

“It is the growing intolerance on the left towards Americans who want to make their own religious choices, including their own sexual choices, that should be respected,” he said. “I’m sad the left won’t respect their choices.”

Of course, nobody is saying that Pence can’t have religious beliefs, nor is anyone saying he can’t be a heterosexual. But when Pence and other conservatives try to force their beliefs upon the American people, it’s a violation of the Constitution and the rights of millions of people. Discrimination is also not protected by the Constitution. If conservatives like Schlapp want to be anti-gay, that’s their choice but they can’t turn their hateful beliefs into policy. That’s what makes them hypocrites, and Pence has been one of the biggest hypocrites of them all.