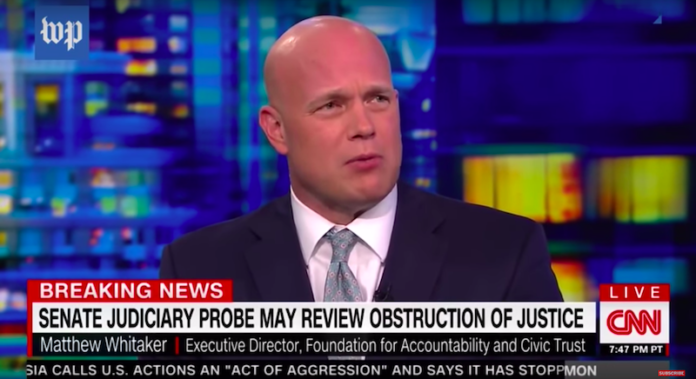 Matthew Whitaker, Donald Trump’s pick to replace Jeff Sessions as Attorney General, has had no shortage of scandals. Since taking over the post, he has faced sharp criticism from Democrats who claim his only role in the Justice Department is to obstruct the Special Counsel Office’s investigation into collusion between Donald Trump’s 2016 campaign and the Russian government. Whitaker furthered this perception when he refused to recuse himself from the case, as former attorney general Jeff Sessions had.

Whitaker decided not to take the advice.https://t.co/6b7nFojpOn

The position gives Whitaker the final say over whether to accept Robert Mueller’s findings or challenge his actions in the capacity of Special Counsel. If he is working in the interest of the president, the president has made his feelings on the Mueller investigation well-known.

However, Whitaker is in the middle of another firestorm at the moment, as the Wall Street Journal reported that he lied on his résumé and government documents. Whitaker claimed to be “Academic All-American” when he played football for the University of Iowa, but further reporting turned up no evidence.

Whitaker repeated the lie on his former law firm’s website, a 2014 résumé to a patent-marketing firm, and in a press briefing from the Justice Department in 2009. According to the New York Post:

“Barb Kowal, a spokeswoman for the organization, told the newspaper it has no record that Whitaker was ever an Academic All-American.”

President Trump already has Whitaker’s replacement, William Barr, lined up, but he has yet to go through a Senate confirmation. Taking into account Whitaker’s previous statements on the Mueller probe and his refusal to recuse himself, the Trump team could be angling for him to more heavily disrupt the Mueller probe before what will surely be a contentious fight over his next appointee.

In any corporate or governmental position, lying on your résumé is a fireable offense. In the Trump administration, however, it seems to be an asset.