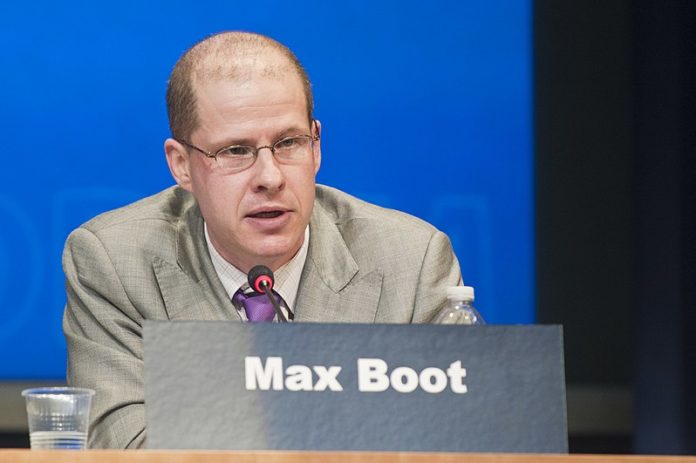 As President Donald Trump ignores the white nationalist beliefs of the shooter who committed an act of terrorism against Muslims in New Zealand, conservative writer Max Boot named Republicans who share the same anti-immigrant beliefs as the terrorist, including Trump himself.

An act of right-wing terrorism resulted in the deaths of 49 Muslims who were praying inside a mosque in Christchurch on Friday, an act of violence that has been condemned all around the world.

And it seems the only people who don’t care about the rising white nationalism that resulted in the killings are right here in the United States within the Republican Party.

But white nationalism is very much a problem, and Max Boot called for treating hate crimes equally and warned that we should pay attention to right-wing extremism.

“We do not treat all hate crimes equally,” Boot began in a Washington Post op-ed. “For decades, we have been understandably focused on attacks by Muslim extremists. I say understandably because 9/11 was the worst terrorist attack ever, and it was only a prelude of the horrors to come. But a focus on Islamist violence should not distract us from the growing threat of right-wing violence.”

Boot then cited the Anti-Defamation League, which condemned the attack earlier in the day.

“The Anti-Defamation League reports that in the United States, ‘right-wing extremists collectively have been responsible for more than 70 percent of the 427 extremist-related killings over the past 10 years’, far outnumbering those committed by left-wing extremists or domestic Islamist extremists,” Boot wrote.

It’s true. Even the FBI and the Department of Homeland Security have issued warnings about the rising acts of violence by white nationalists.

The motives of these attacks are rooted in the hateful and racist rhetoric and beliefs of white nationalists, who believe people of color and those of different faiths are “invading” Western civilization to replace white people.

“The alleged Christchurch shooter’s loathsome manifesto is called ‘The Great Replacement,’ a common trope of white supremacists,” Boot pointed out. “He complained of ‘mass immigration’ and “higher fertility rates of the immigrants” leading to “the complete racial and cultural replacement of the European people.”

Boot then named names of Republicans who share the same beliefs or who have spouted the same rhetoric to incite fear and violence.

“Does any of this sound familiar?” he asked. “It should. Rep. Steve King (R-Iowa) has spoken of his own fears of the ‘great replacement.’ Stephen K. Bannon, President Trump’s former counselor, has voiced admiration for a racist French novel called ‘The Camp of the Saints’ that imagines France being overrun by nonwhite newcomers. Trump himself has expressed support for Le Pen; said: ‘Islam hates us’; praised white supremacists as ‘very fine people’; and warned of an ‘invasion’ of undocumented immigrants.”

We can also add Trump’s immigration adviser Stephen Miller to this list along with several Fox News hosts like Laura Ingraham and Tucker Carlson, but the focus should be on Trump himself.

Indeed, just prior to his denial of the rise of white nationalism, Trump once again claimed that illegal immigrants are “invading” the United States and blamed them for all of the country’s problems. It’s the same strategy Adolf Hitler used to demonize the Jews.

As Boot concluded, he warned that Trump’s rhetoric could result in similar atrocities.

“It is well past time for the president to accept responsibility for his rhetoric and to tone it down,” he said. “Because the wrong words can inspire the worst acts.”

And that appears to be what Trump wants. He has already encouraged his supporters in the police and military to commit violence against his political opponents and critics. He has put thousands of migrant children in internment camps and uses ICE as his stormtroopers to terrorize immigrants across the nation. He also just announced a “MAGA” rally during which he will likely repeat his same slanderous remarks about immigrants in order to generate more hate and fear, which can only lead to violence and death. Trump already has blood on his hands. Now he apparently won’t stop until he is bathing in it.

ABOUT US
Lefties, Liberals, Progressives, Social Justice Warriors, Old Hippies, Concerned Millenials, Reformed Republicans and Democrats of Whatever Stripe – Welcome Home! We offer aggregated news – which means our writers credibly source and report on the news of the day. In all fairness, our team leans left and may editorialize from time to time but we are committed to giving you the facts. No tin-foil hat conspiracy theories here! Our Activism Resource Database is second to none and covers the spectrum from Animal Rights to World Peace (there were no categories that begin with Z). We make every effort to give you the most current information on ways you can make a difference. Whether you are an Armchair Activist or Full-Blown Social Justice Warrior we have something for you.
Contact us: admi[email protected]
FOLLOW US
© 2019 TheUnitedStatesBlues.com