The United States Blues
Home News Mayor of London says his city shouldn’t have to roll out the... 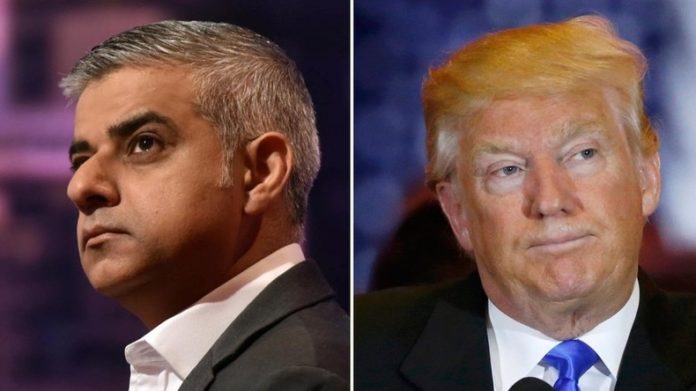 Sadiq Khan, the mayor of London, has a message for President Donald Trump, who will be visiting England beginning Monday: Do not expect a warm welcome from the British people.

In an op-ed he wrote for The Guardian, Khan notes that Trump is part of a larger threat sweeping across the world that is empowering racist, authoritarian leaders:

Donald Trump is just one of the most egregious examples of a growing global threat. The far right is on the rise around the world, threatening our hard-won rights and freedoms and the values that have defined our liberal, democratic societies for more than seventy years. Viktor Orbán in Hungary, Matteo Salvini in Italy, Marine Le Pen in France and Nigel Farage here in the UK are using the same divisive tropes of the fascists of the 20th century to garner support, but are using new sinister methods to deliver their message. And they are gaining ground and winning power and influence in places that would have been unthinkable just a few years ago.

All of that, Khan continues, means that London shouldn’t be expected to welcome Trump with open arms:

That’s why it’s so un-British to be rolling out the red carpet this week for a formal state visit for a president whose divisive behaviour flies in the face of the ideals America was founded upon – equality, liberty and religious freedom.

There are some who argue that we should hold our noses and stomach the spectacle of honouring Trump in this fashion – including many Conservative politicians. They say we need to be realists and stroke his ego to maintain our economic and military relationship with the US. But at what point should we stop appeasing – and implicitly condoning – his far-right policies and views? Where do we draw the line?

Mayor Khan concedes that there’s little anyone can do about the pending visit from Trump, but he does hope Prime Minister Theresa May will speak truth to power when she meets with the president:

Theresa May should issue a powerful rejection – not of the US as a country or the office of the presidency, but of Trump and the far-right agenda he embodies. She should say that the citizens of the UK and the US agree on many things, but that Trump’s views are incompatible with British values.

History teaches us of the danger of being afraid to speak truth to power and the risk of failing to defend our values from the rise of the far right. At this challenging time in global politics, it’s more important than ever that we remember that lesson.

Trump’s views aren’t just incompatible with British values. They’re contrary to the values of humanity and decency, too.