The United States Blues
Home Elections Mayor Pete shreds the MAGA myth with one inspiring speech that has... 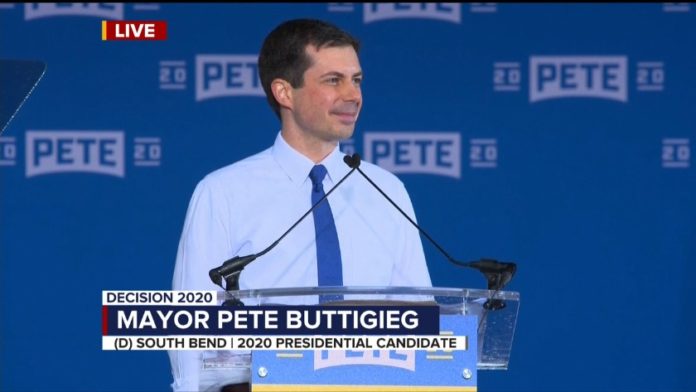 Sunday in South Bend, Indiana, Mayor Pete Buttigieg sounded the clarion call for a new generation of leadership to lead the United States in a brighter future post-Donald Trump, and what he had to say has the country buzzing with the kind of palpable excitement not seen since Barack Obama first ran for the White House in 2008.

The most powerful portion of Buttigieg’s speech was when he took the inherent falsehood of the myth that President Donald Trump has spun regarding the idea of making America great again, which is often referred to simply as MAGA:

“And that’s why I’m here today. To tell a different story than make America great again. Because there’s a myth being sold to industrial and rural communities, the myth that we can stop the clock and turn it back. It comes from people who think the only way to speak to communities like ours is through resentment and nostalgia.”

Then Buttigieg went even further, clearly reaching out to those voters who supported Trump in 2016 because of the empty dream he was selling:

“They’re selling an impossible promise of returning to a bygone era that was never as good as advertised to begin with. The problem is that they’re telling us to look for greatness in all the wrong places. Because if there’s one thing that the city of South Bend has shown it’s that there is no such thing as an honest politics that revolves around the word again. It is time to walk away from the politics of the past and towards something totally different. So that’s why I’m here today.”

#MayorPete goes straight after the #MAGA myth and makes an appeal to Rust Belt and rural communities while kicking off his presidential campaign. pic.twitter.com/CmQjIOl4Hk

In that bygone era of the bad old days, a gay man like Mayor Pete would have had to remain in the closet and never been allowed to marry who he wanted. Now, however, with the strides that have been made, he and others are rising and claiming their share of the American dream.

What we witnessed Sunday in Indiana was the dawn of a new day in American politics. It’s a politics of inclusion, promise, and hope. Because America is already great. Now we just need to make sure we build “a more perfect union” for all.