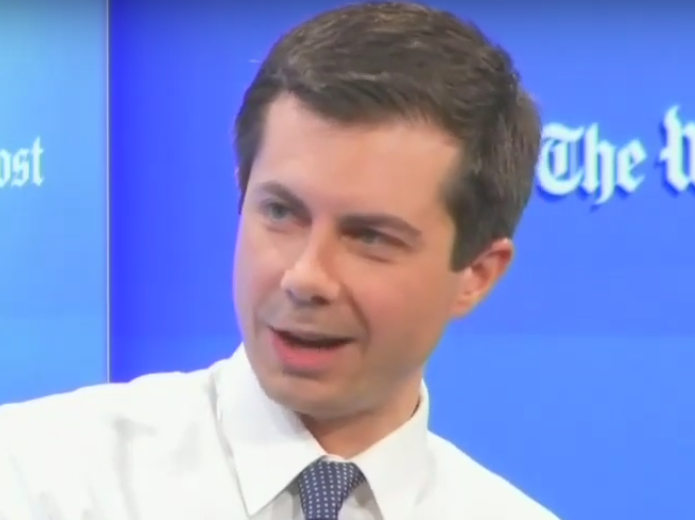 As President Donald Trump prepares to pardon ex-servicemen who have been convicted of war crimes and is marching America into a war with Iran, Mayor Pete Buttigieg called him out for dodging the draft during the Vietnam War on Thursday.

During an event hosted by the Washington Post, the South Bend, Indiana mayor and 2020 Democratic presidential contender took on a question that is very relevant to his status as a military veteran.

While Buttigieg served during the war in Afghanistan, Trump repeatedly refused to fight for our country during the Vietnam War. On five occasions, Trump dodged the draft, even getting a doctor to diagnose him with a bone spur in his foot the fifth time after he had been declared fit for service.

Trump has failed to provide any proof of the diagnosis.

“You believe he faked a disability?” the event moderator asked Buttigieg.

“Do you believe he has a disability?” Mayor Pete replied.

“At least not that one,” Buttigieg joked before turning serious. “This is somebody who, I think it’s fairly obvious to most of us, took advantage of the fact that he was a child of a multimillionaire in order to pretend to be disabled so somebody could go to war in his place.”

Indeed, Trump has been mocked each time he has visited Vietnam as president as people point out that somebody else probably got killed in his place while he spent his time in the states partying and sleeping around. Trump even once claimed that sleeping around was his “personal Vietnam” because he risked getting an STD at the time by having unprotected sex.

Trump will also never be forgiven for insulting the late-Senator John McCain for being a POW who suffered brutal torture in Vietnam. Again, McCain suffered for his country while Trump screwed around.

The difference between Buttigieg and Trump could not be more clear. Buttigieg fought for our country and Trump displayed utter cowardice when his turn came to serve. That gives Mayor Pete a distinct advantage over Trump in any election.