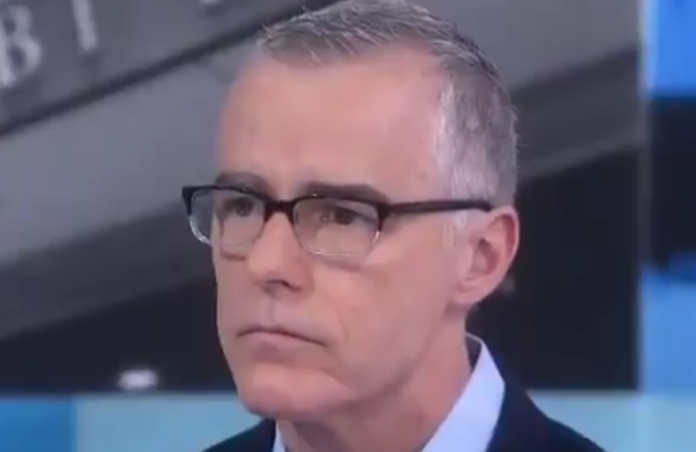 Former FBI Assistant Director Andrew McCabe made a stunning revelation on Tuesday morning that undermines President Donald Trump’s complaints about the FBI opening a counterintelligence investigation against him in 2017.

In January, reports surfaced revealing that the FBI opened an investigation against Trump in 2017 shortly after he fired former FBI Director James Comey on suspicions that Trump may be working for the Russians. The results of that probe have not been disclosed because the investigation turned into the Russia investigation now headed by Special Counsel Robert Mueller.

Trump and Republicans have been whining about the report ever since, accusing the FBI of treason.

But now McCabe is throwing cold water on that outrage, particularly from Republicans in Congress because he told The TODAY Show that the FBI informed Republican leaders of the investigation and not one of them voiced an objection.

“No one objected,” McCabe said of the briefing. “Not on legal grounds, not on constitutional grounds, and not based on the facts.”

McCabe also noted that the FBI had information leading them to believe Trump is a threat to national security.

“We had information that led us to believe that there might be a threat to national security, in this case, that the president himself might, in fact, be a threat to United States’ national security,” he said. “You have to ask yourself why any president of the United States might not want to get to the bottom of Russian interference in our election.”

Here’s video clips of the bombshell interview via Twitter.

McCabe says top Republicans in Congress were briefed about FBI’s counterintelligence investigation into Trump — and raised no objections. pic.twitter.com/ClqJ1McjWU

Former FBI director Andrew McCabe tells @TODAYshow he thought it “might be possible” President Trump was secretly working for Russia, citing Trump’s repeated attempts to undermine the investigation into his campaign’s dealings with Russia. pic.twitter.com/YkHJHz9tlw

If Republican leaders, including Senate Majority Leader Mitch McConnell (R-Ky.) were already told about the investigation at the time and had no objections, their outrage now is a complete sham. The FBI clearly did their job by opening the investigation and Republicans knew it then and they know it now. And every American should be outraged by their behavior toward the FBI.

Behind closed doors, Paul Ryan and Mitch McConnell did not object when they learned almost two years ago that the FBI was investigating whether Trump was compromised.

How do you square that with their public silence and tacit approval of Trump’s attacks on the FBI and DOJ? https://t.co/Q8PMtNhuKj

Republicans have some serious explaining to do.