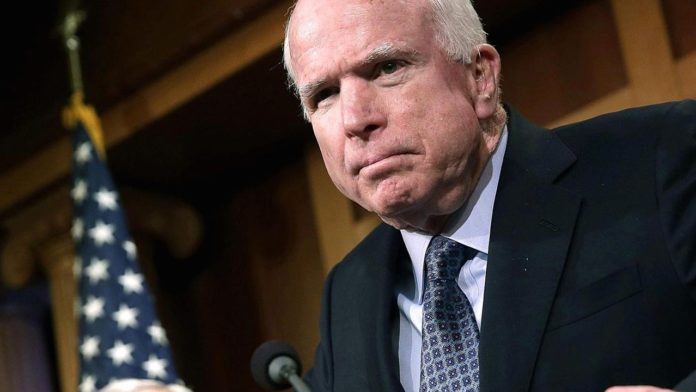 Senator John McCain (R-Ariz.) looks to have joined Senator Lindsey Graham (R-S.C.) to call out President Donald Trump over his most recent disgusting attacks on the Russian investigation.

Lindsey Graham said to CNN’s Jake Tapper on Sunday that:

“IF HE TRIED TO DO THAT, THAT WOULD BE THE BEGINNING OF THE END OF HIS PRESIDENCY, GRAHAM SAID ON CNN’S ‘STATE OF THE UNION.’ THE ONLY REASON MR. MUELLER COULD EVER BE DISMISSED IS FOR CAUSE. I SEE NO CAUSE WHEN IT COMES TO MR. MUELLER. HE NEEDS TO BE ABLE TO DO HIS JOB INDEPENDENT OF ANY POLITICAL INFLUENCE. I PLEDGE TO THE AMERICAN PEOPLE AS A REPUBLICAN TO MAKE SURE THAT MR. MUELLER CAN CONTINUE TO DO HIS JOB WITHOUT ANY INTERFERENCE. I THINK HE’S DOING A GOOD JOB.”

McCain issued an even stronger warning to Trump about keeping his tiny little hands out of the investigation and realize the consequences that would follow should he fire Robert Mueller. McCain, one of the few Republican Senators who took a strong stand against Russia and its interference in our elections, tweeted that:

Special Counsel Mueller has served our country with honesty and integrity. It’s critical he be allowed to complete a thorough investigation into Russia’s interference in the 2016 election — unimpeded.

Even if the long-serving Senator and former 2008 Republican Presidential Candidate most stands in opposition to many of the ideas and policies that Democrats and progressives hold dear, his weakened state appears to have made him extra principles and willing to take on the paranoid, wicked, and destructive monster who’s currently squatting at the White House.

Maybe McCain can convince more of his Republican colleagues to actually remember what country and the constitution is all about and inspire them to take similar positions, but don’t that seems about as likely as Melania Trump kissing her husband in public.