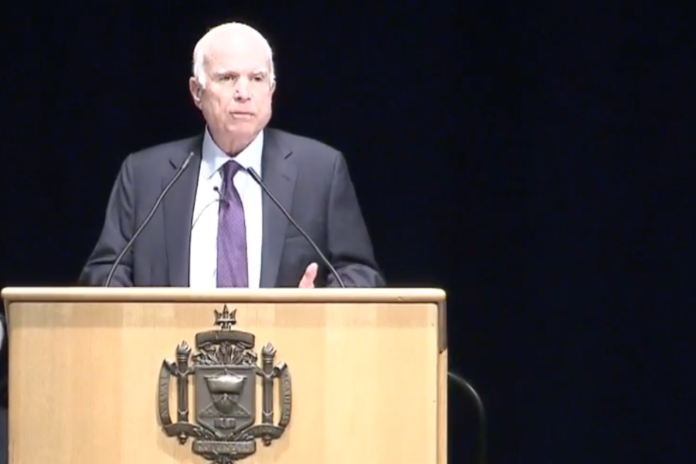 It appears that John McCain plans to troll Donald Trump straight out of office.

McCain gave a speech at his alma mater US Naval Academy on Monday in which he warned the country against the populism, nationalism and, isolationism being promoted by President Trump and his administration.

McCain, who has been diagnosed with terminal brain cancer, is using his platform to call out Republicans for falling into Trump’s trance. He calls on his colleagues and the American public to “wake up.” The senator’s speech marked the second time this month he has trolled Trump’s policies and politics.

The senator’s speech marked the second time this month he has trolled Trump’s policies and politics.

McCain has not used Trump’s name in his speeches. Upon reading the text, however, it becomes clear that there is no chance whatsoever that the speech is not directed at the President.

“We are asleep to the necessity of our leadership and to the opportunities and real dangers of this world. We are asleep in our echo chambers, where our views are always affirmed and information that contradicts them is always fake. We are asleep in our polarized politics, which exaggerates our differences, looks for scapegoats instead of answers and insists we get all our way all the time from a system of government based on compromise, principled cooperation, and restraint.”

If that is not a troll of the Republican party, I don’t know what is.

“…where our views are always affirmed, and information that contracts them is always fake.” Does this description remind you of anyone? Perhaps a man with orange-tinted skin and the demeanor of an irritated child?

McCain warns against attacks on our values. His words are a call for Americans to fight for what we believe in.

“We have gone from an interval when the global success of democracy seemed assured to a time in which the seductions of authoritarian rule find favor with many; when self-interested leadership excuses naked aggression with weak rationalizations; when ethnic grievances haunt the old and religious fanaticism fires the minds of the misguided young.”

In other parts of the speech, McCain was more direct.

What does this translate to?

Truer words have not been spoken. Our democracy has been under attack from the inside-out for quite some time.

McCain, to his credit, is making an effort to wake people up on his terms. He may very well succeed in that matter. As constituents, we have to continue to put pressure on Republicans not only to take a stand against Trumpism but also to stand up for human rights. Only a progressive turn can lift us out of this mess.

As constituents, we have to continue to put pressure on Republicans not only to take a stand against Trumpism but also to stand up for human rights. Only a real progressive turn can lift us out of this mess.