The United States Blues
Home Politics Congress McConnell urged to ‘get the Senate back’ from recess after latest Texas... 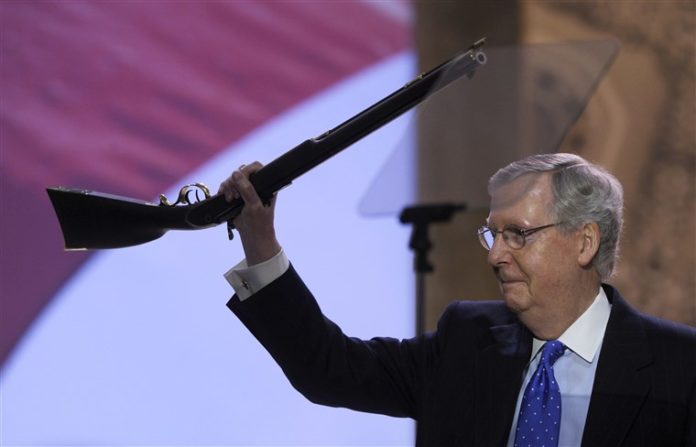 Saturday evening in Odessa, Texas, a shooter killed five people and wounded another 21, less than a month after a mass shooting at Walmart in El Paso, Texas, left 22 people dead and 24 wounded, CNN reports:

A gunman in West Texas who killed five people while firing from his vehicle and then from a hijacked mail truck was shot and killed by police in a gun battle in a movie theater parking lot, authorities said Saturday.

At least 21 people were injured, including some who were wounded by the shooter, Odessa Police Chief Michael Gerke said at a news conference.

Minutes after the news spread across cable news, Fred Guttenberg, whose daughter Jaime was murdered in the mass shooting in Parkland, Florida, demanded action from the U.S. Senate, which is currently in recess:

Sounds like 30 shot. @senatemajldr, ENOUGH!!! Get the Senate back. This is an emergency.https://t.co/UCb0U3wbTy

Then others on Twitter joined the call for something to be done, and he directed his remarks at Senate Majority Leader Mitch McConnell (R-KY):

So, two terrorists are driving around Texas shooting people, AND a category 4 storm is headed for the east coast.

Meanwhile Trump is playing golf with the NRA, and somewhere in Kentucky, #MassacreMitch licking a rifle. #Odessa #Midland pic.twitter.com/lANZ3XhhCu

@senatemajldr hey #MassacreMitch why don’t you get in your car and go for a drive around Odessa East Texas. Get off your ass and out of the pockets and #dosomething Get your ass back from vacation and vote of gun reform. Blood is on your hands with life lost to gun violence

Another weekend in AmeriKKKa. Another Mass Shooting…’Ho-hum.’ Maybe @TomiLahren will put on her drumpf, camel-toe gun pants, and save the day! OR perhaps @SenMajLdr #MassacreMitch can get his Turtle head out of his ASS and DO something! Oh yea, he only cares about Donor Money. pic.twitter.com/B2Krjr9hKJ

Mitch McConnell was banking on everyone forgetting about the need for gun control at the end of the August recess… It’s pretty safe to say that plan has failed https://t.co/Z8dDwRcKQH

It’s probably wise advice to suggest that no one hold their breath waiting for McConnell, Trump, or any other Republican to do anything about gun violence, even after they return from their extended recess.