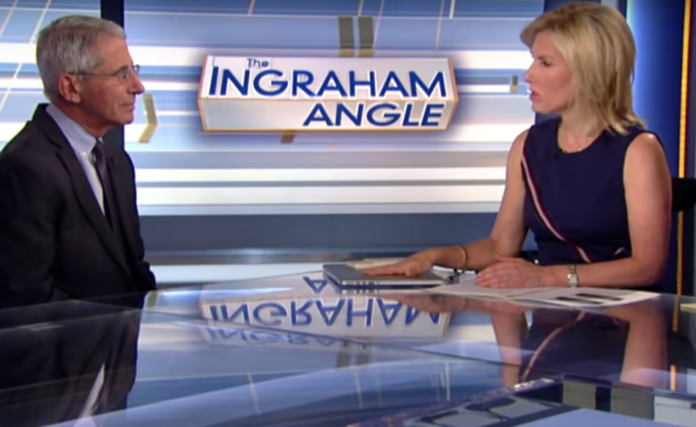 The notable immunologist appeared on the show to discuss recent measles outbreaks in New York among Hasidic Jews who travel to Israel where vaccination rates are low among Orthodox Jews and become infected and carry the disease back home where unvaccinated children are exposed to it.

“The umbrella of protection in the community was lifted and you had an outbreak,” Dr. Fauci explained.

Ingraham then suggested vaccinations are unsafe as if she was hoping Fauci would agree with her.

“Vaccinations, still controversial in some circles,” she said. “People saying, ‘look, you get too many vaccines at one time, you can have a heightened risk of other problems.’”

Indeed, thousands of parents have joined the anti-vaxxer movement in recent years because they falsely believe vaccines cause autism or other side effects that harm children even though there is no scientific evidence that vaccines are dangerous. Any side effects are incredibly rare and does not excuse not vaccinating children against a disease that killed thousands prior to being wiped out by vaccines.

The anti-vaxxer movement is currently blamed for several measles outbreaks across the country and GoFundMe even banned anti-vaxxer funding campaigns because their views are putting the public health at serious risk.

Dr. Fauci did not let Ingraham spread her lies about vaccines and called her out directly.

“It’s misinformation, Laura, it really is,” he replied. “If you look at the evidenced-based facts, vaccines are safe. The MMR-measles, mumps, rubella-is a safe vaccine. And the measles vaccine is one of the most effective vaccines we have, 97 percent effective.”

Understanding she was being schooled, Ingraham quickly switched topics.

Laura Ingraham brings on a Dr to ask why there’s a measles outbreak, Dr says its bc kids arent getting vaccinated, Laura says vaccines cause problems, Dr says that’s a lie, Laura moves right on pic.twitter.com/BzhXHMg6e2