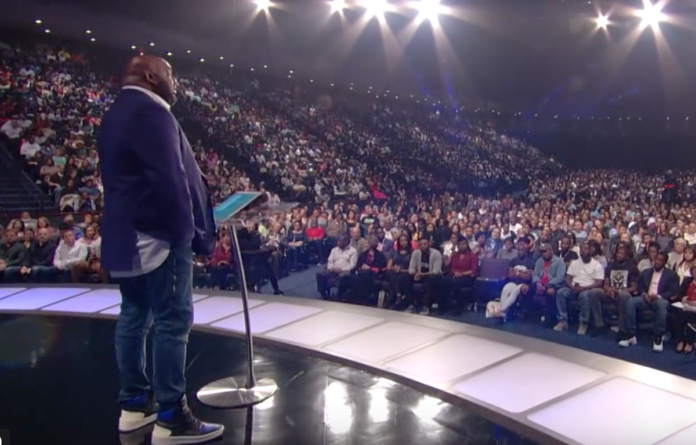 All hell broke loose when Pastor John Gray gave his wife a $200K Lamborghini SUV at a ceremony celebrating his eighth anniversary on Saturday night. He led his wife, Aventer Gray, before a crowd to the luxury car topped in a bow. Handing her the keys, he proclaimed, “Lamborghini Urus” as the crowd screamed and Aventer reacted excitedly. Then the pastor and his wife came under a firestorm of criticism when the video hit social media. Someone other than Gray posted the video which has since been taken down.

Eight years ago, the couple was so poor they shared a shrimp cocktail on their honeymoon. Today they can afford a Lamborghini and they aren’t going to apologize.

“God helped me to make my wife’s dream come true,” Gray, a Cincinnati native, later wrote on Instagram on Tuesday.

“Why not? She’s made mine come true!”

On social media, Gray drew fire from critics who accused him of using church funds to lavish gifts on his wife. He responded to the criticism, posting videos to Facebook Live and Instagram in which he clarified that “not a nickel, not a penny” of church funds were used. Instead, he claimed resources came from his lucrative book deals and his Oprah Winfrey Network reality-TV show, called The Book of John Gray, now in its fourth season.

In May, Pastor Gray, 45, became the leader of a non-denominational, evangelical megachurch renamed Relentless Church in Greenville, South Carolina. It has been called Redemption Church for 27 years until church founder Ron Carpenter handed over the church to Gray, along with responsibility for 22,000 active members. Not only does Pastor Gray controls the assets and mission at Relentless Church but he also remains an associate pastor at Joel Osteen’s Lakewood Church in Houston. Osteen lives in a $10 million dollar mansion.

Gray took to Instagram, where he defended his wife and talked about the attacks from fellow Christians on their characters.

“This has been a really difficult week because there’s nothing worse than being misunderstood and attacked,” said Gray.

“I don’t mind people who don’t believe in God attacking. They wouldn’t understand, but it’s the Christians who hit, and I mean, they’re hitting hard,” said Gray.

Pastor Gray defended his wife from the attacks, saying they shouldn’t blame her for the lavish surprise gift. He responded to one person who criticized them both and claimed they would go to hell, saying people are sent to hell for their beliefs, not for their belongings.

“I hear somebody say we was going to hell because I got my wife a car. Are you stupid?” asked Gray. “What is that?”

In a prayer, the pastor prayed for those who couldn’t “handle” what he had done.

“I learned a lot this week. I learned that everybody can’t handle how you bless and how you choose to bless,” said Gray.

Meanwhile, Aventer responded on her social media, comparing it to the lifestyle of professional basketball players.

“I don’t see anyone screaming about how basketball players drive what they do while you paying $$$ to see them play in arenas and on fields,” she wrote on Instagram.”

“We don’t live for people! We live for God!”

According to Cincinnati.com, the couple first saw the Lamborghini SUV at their hotel when they went to an NBA All-Star Game in Los Angeles.

Recently, Pastor Gray has called on the needy in his congregation to approach the altar and take what they needed from the collection baskets. His wife claims that he has given away cars and furniture, and the clothes off his back, in addition to tithing to his church.

Gray regularly preaches about an elevated threat from the Devil and demons on his congregation and how it threatens his church.

“The enemy is hoping that the weakened state of the global church and the entertainment-driven church, which is more excited about the look of a thing than the truth of a thing will get caught up in that and never change,” Gray told his massive crowd in April.

Now he and his church must question if their pastor should lead such a lavish lifestyle while many in his congregation struggle to buy money for gas. Any search for his name now brings up this story about the looks of a Lamborghini, not the truth of anything he has ever said.

8 years. New beginnings. New hope. New life. And for her-a new whip. I put a faith deposit down in February and God helped me to make my wife’s dream come true. Why not? She’s made mine come true! #GodIsMyWitness #BookContract #HatersBeBlessed >>>>> This part is from @grayceeme…. RESTORE, REDO, RESET…LOOK WHAT GOD HAS DONE! From 12/11/10 til 12/11/18 There is something to be said about another try…you have had an experience, and it doesn’t mean you failed, it means you get to challenge yourself to start Anew! TODAY WE ARE 8 HUSBAND @realjohngray! My favorite #, your fav #…your book title, and so much more to us, but We utilized the 8th to have our vow renewal & our celebration display of love for OUR milestone 8 year Covenant to signify…and say again, our pledge to God in front of one another….about one another! Some asked why 8…8 represents resurrection and regeneration, moreover the beginning of a new era or that of a new order. YES GOD! I saved to give you one of the best gifts and a dream timepiece and my God, you blessed me, significantly when in Feb at the All-Star hotel, we sat in this phenomenal new SUV, then you allowed me to build one online and DREAM…not really believing it would happen for real, but then, we “WIN FROM WITHIN” Lololol &…It DID! I will never apologize for how hard we work and how we want to bless each other… PSALM 112:1-3… I love you. You are mine and I am yours. Thank you for taking care of me, for the past 8, and I trust the Lord by faith that for the next 88 you will do the same, so will I, and much more. Highs, lows, mistakes, misfortune, we are STILL HERE AND THE DEVIL IS MAD BECAUSE GOD GETS THE GLORY…with God all lead back to true love! There is no one I would rather do this life with than You! 😘 My heart, my soul, and my life I give to you AGAIN, and AGAIN by God’s order. Happy 8th Anniversary Boo! #WeareNumber8 #GraysR8 #ThisisUs #BlackLove #ComeHereLetMeWhisperSomethingToYouLOL #BestPart #SwipeLeft

See more in the videos below: