The United States Blues
Home Entertainment Meghan Markle, Cardi B, And How We Use Shame To Control Women 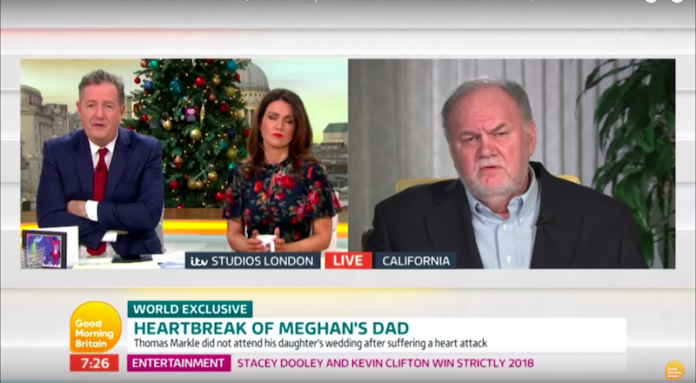 With recent midterm wins by women and people of color, the internet is abuzz with slogans like, “The Future Is Female” and the victories are celebrated in a country hurtling towards authoritarianism as a sign of a progressive push back. However, the politics of gender do not operate simply along partisan lines, and recent examples prove the corrosive nature of a societal push to control women through the court of public opinion.

In a recent interview with “Good Morning Britain,” Thomas Markle, father of the Meghan Markle (formally known as the Duchess of Sussex after her marriage to England’s Prince Harry), issued a candid cry for reconciliation. Apparently, their relationship has been strained ever since the duchess entered the whirlwind of a princess fantasy, and now their contact has ceased entirely. The debacle has also ignited tensions between Buckingham Palace and Kensington Palace, with Queen Elizabeth II herself feeling that Meghan should have handled the situation before it spiraled out of control.

Interviewers Piers Morgan and Susanna Reid emphasized how sad the situation was and Markle’s desperation to the point of exhaustion, even titling the interview “Heartbreak of Meghan’s Dad” on the lower third of the screen. In a spirit of true journalistic malpractice, the pair, in an 18-minute interview, failed to press Markle on the exact origin of his emotional rift with his daughter.

Markle: “I think she’ll reach out in time and I’m hoping that. She knows I’m here.”

Piers: “I hope she does. If Meghan’s watching this … c’mon, Meghan. This is your dad. It’s Christmas. You loved your dad. I know you did because you told me.”

Cardi B recently experienced the same kind of social pressure when her estranged ex-husband Offset interrupted her first headlining gig with roses. He begged her to take him back after he had cheated on her. Being backed into a corner at your job with hundreds of witnessing fans hardly seems the most appropriate setting for a marital dispute. But The Atlantic’s Spencer Kornhaber posits the move indicates that authenticity, for Offset, is secondary to control.

“She’s expected to save not only her own marriage, but also the entire institution of marriage. This is explicit: In his appeal to Cardi, The Game wrote that she needs to help set ‘super dope examples for this new generation of growing couples to remain solid and really stay true to those wedding vows.'”

Ariana Grande received blowback earlier this year in connection to the suicide of her ex-boyfriend Mac Miller. Many took to social media to blame her for the mental health issues of Miller and SNL’s Pete Davidson, her ex-fiancé.

saddest chain of events that should surprise no one: ariana grande cheating on mac miller to get with pete davidson, mac miller dying, and ariana breaking it off with pete pushing him to the brink of suicide. human attraction/attachment is no fucking joke. please get well pete.

The thread through these three situations — Markle, Cardi B, and Grande — is that a woman is expected to grant a man’s request, whether or not she wishes to (an idea shown to have deadly consequences for some.)

Though Grande may have wanted to leave these relationships, she was obliged to account for the fragile emotional state of her partner, and she should have stayed, regardless of her desire. Though Offset may have cheated on Cardi B, he now wishes to reconcile, so she should as well. And as for the Duchess of Sussex, it is now Christmas, and that means that the actions likely jointly undertaken to create her fractious relationship with her father simply do not matter. Most importantly, her desire not to speak with him does not trump the fact that he wishes to speak with her.

Even on the heels of a groundswell of activism in the face of a president openly hostile to women and incapable of understanding a woman’s value outside of her sexual appeal, these stories show how firmly embedded society’s mechanisms for controlling women really are. They also exemplify the willingness of fans and media outlets to use coercion and shame against women, and to capitulate to these dangerous narratives about what love really is. And without a reckoning of these foundational aspects and challenges of gender politics, true equality still remains a far ways off.