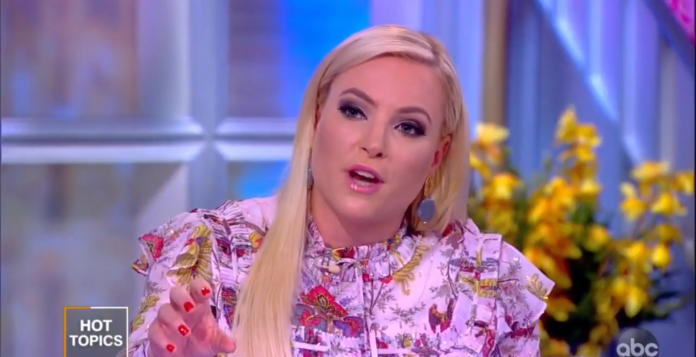 Meghan McCain. one of the co-hosts of “The View,” tried to defend Secretary of Education Betsy DeVos on the show Friday and was quickly taken to task by her fellow co-hosts.

The debate over DeVos’ plan to cut federal funding for the Special Olympics led Joy Behar to note that such a move reveals a great deal about the Trump administration:

“This shows you though what this administration is all about, right there it shows you. To the point that she’s working for him when she’s so rich and has 10 yachts, have you seen the pictures? She’s really rich — really rich. Rhymes with rich, huh?”

McCain rushed to defend DeVos, saying her wealth was irrelevant:

“I don’t think her wealth should be held against her in this situation. I actually think it’s admirable when people are extremely wealthy and decide to go into service.”

Then McCain said whether or not DeVos has empathy for those with special needs  should also not be a part of the conversation:

“I don’t think it was about her heart in this situation. I think it was about the idea that where we should make cuts on programming, and that was her argument, which we all agreed yesterday was ill-advised, and the amount of money was, I believe $15 million, which is four trips to Mar-A-Lago. If we can just again extract emotion from some of these conversations and stick with facts instead of doing character assassinations on people, i think it’s more effective.”

But co-host Ana Navarro explained she couldn’t remove her emotions from political discussions, which only made McCain more defensive:

“I don’t like her, I don’t like him. As everyone is very clear, I have a lot of personal feelings about the president, but for me to get through this administration, I can’t traffic in this kind of way. I have to stick with facts or I’m going to lose my mind.”

Defending this president or anyone in his administration is a fool’s errand. Their actions are indefensible and so are they.