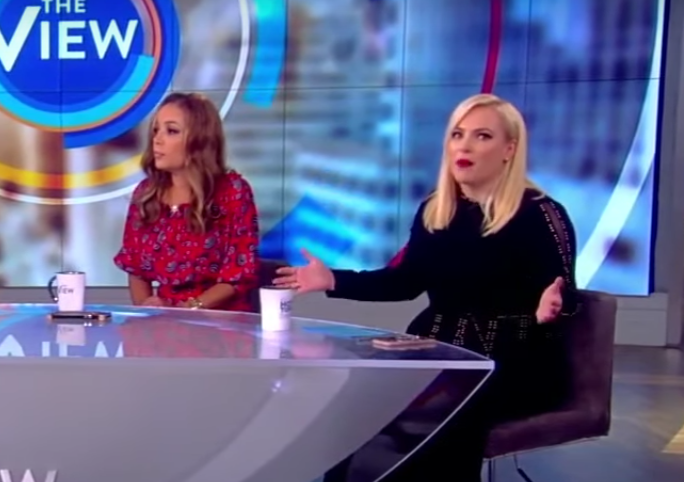 “The View” co-host Meghan McCain did what she does best on Monday when she attacked Democrats and whined about her colleagues disagreeing with her.

President Donald Trump has been attacking the four Democratic women lawmakers of color known as “The Squad” for over a week now for criticizing him and America’s longstanding problems of racism and inequality.

Trump has accused the four of not loving America and his top adviser Stephen Miller defended his attack on Sunday, resulting in an epic response from Whoopi Goldberg before Joy Behar called for sending Miller “back to Transylvania”.

Sunny Hostin chimed in by pointing out that dissent and criticizing America has been part of this country since its founding.

But, as usual, McCain ignored Trump’s effort to divide Americans by focusing on divisions within the Democratic Party, and took shots at Rep. Alexandria Ocasio-Cortez (D-N.Y.) and Rep. Rashida Tlaib (D-Mich.) specifically.

“I think the politics of this is fascinating,” she said. “We spent our entire week last week talking about how racist and xenophobic the original comments and the chants were, and I stand by that statement. I will say AOC’s chief of staff tweeted. He compared moderate Democrats to segregationists and said they were, quote, enabling a racist system.”

AOC’s chief of staff is right. Moderate Democrats don’t seem to be interested in changing America’s systemic institutional racism, and that means they are effectively enabling it.

“I compared it to fratricide because there is this deep infighting within the Democratic Party, and not just ‘The Squad,’ because there are more members of the Democratic Party that have the same similar views that ‘The Squad’ has, and more moderate Democrats, and I also think when (Rep.) Rashida Tlaib goes on ‘CBS This Morning’ and she says to Nancy Pelosi, ‘acknowledge the fact this they are women of color so when you single us out, be aware of that and what you are doing, especially because some of us are getting death threats,’” McCain rambled on.

“I still think the debate between ‘The Squad’ and Nancy Pelosi and more moderate Democrats is what Trump wants,” she said. “As long as they are the face of the Democratic Party, which I know there are people in here that are probably fans of theirs, but there are a lot of moderate Democrats in the country that maybe aren’t on board with some of the radical things that they have said. He needs someone to fight with, and he needs an enemy, and right now they antithesize everything that (he promotes).”

The “radical things” McCain is talking about includes calls for universal healthcare, which a majority of Americans support, and the Green New Deal, which is also popular. Both items would significantly improve our country and help our people. Moderates who would rather stick with the status quo are just enabling Republicans. The Democratic Party used to be progressive and those roots are what many Americans want the party to return to because that’s what made America truly great.

It’s a fight within the party that should be fought, and even Behar said that the GOP could stand to do the same.

“It’s a purging of differences,” Behar said. “The Republican Party, in my opinion, could use a little bit of that, where they go against each other instead of falling in lockstep with a fascist.”

Indeed, Republican obedience to the dear leader is doing more damage to our country than anything else right now.

But McCain thinks winning elections is about being moderate, which is ridiculous considering Trump is a right-wing extremist who beat Hillary Clinton, a moderate Democrat. Many progressive policies are popular among the American people, and anything popular is automatically labeled “socialism” by Republicans in order to demonize it and poison the well.

Hostin disagreed that the four congresswomen are the face of the party, and that’s when McCain lost it and began shouting.

“They are hugely powerful,” she said. “They are our ‘hot topic’ every single day now.”

Before she could fly into a full-blown tantrum, Whoopi threw it to a commercial break.