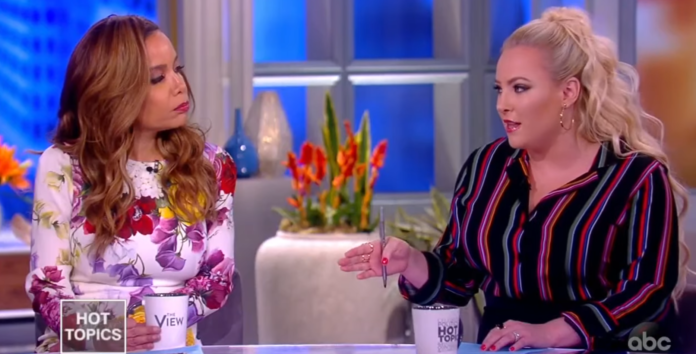 Meghan McCain tried to blame Wikileaks founder Julian Assange on Democrats Thursday, and was brutally fact-checked by her fellow hosts for making such a ridiculous assertion.

Assange was arrested at the Ecuadorian embassy in London Thursday morning, and that led Abby Huntsman to suggest that former President Barack Obama and his attorney general, Eric Holder, should have charged Assange when they were still in office:

“(Barack) Obama and (Eric) Holder could have done it the year before, and they punted it. That’s where I get confused. You hear Trump praising the guy, and then they prosecute.”

That led McCain to tee off further on the Obama administration:

“Eric Holder didn’t pursue prosecution of Assange (over) concerns that WikiLeaks was, quote, a journalistic organization that would raise First Amendment issues. Chelsea Manning was granted clemency. Chelsea Manning in 2010 released 750,000 classified and sensitive documents that put national security documents. Under the Obama administration, she was given clemency.”

And McCain was only getting warmed up, adding:

That’s when co-host Sunny Hostin did a brutal fact-check on McCain, reminding her that there are laws which govern who can and can’t be prosecuted:

McCain tried to interrupt Hostin, but was told:

“Excuse me. You can after I’m finished speaking.”

Hostin then took McCain to school on what is allowed and what isn’t under our system of law:

Clearly peeved by what Hostin had just said, McCain sniped:

“What you said was straight propaganda just so we’re clear. I’m sorry.”

Again, Hostin was more than ready for her co-host:

“The law is propaganda? I’m sorry.”

Keep in mind that Donald Trump once called Julian Assange a terrorist and said he should be executed. But he then turned around and said how great WikiLeaks was when they leaked hacked information from the Democratic National Committee. Apparently Republicans are fine with criminal acts as long as they benefit from them.