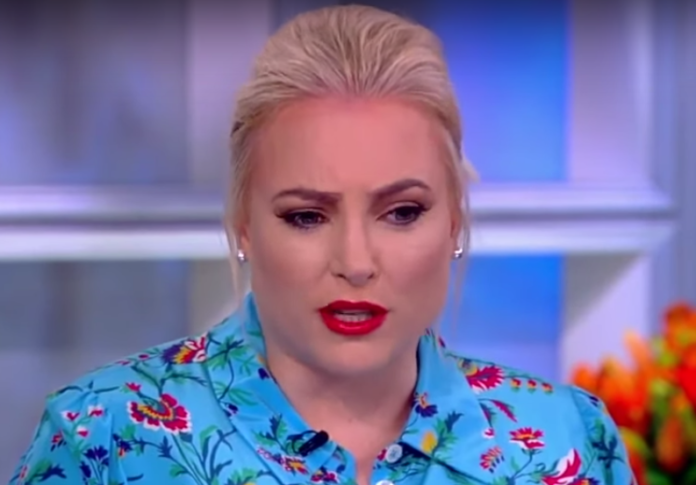 Meghan McCain once again defended evangelicals after Whoopi Goldberg rightfully called them out for not condemning accused child sex trafficker Jeffrey Epstein during “The View” on Wednesday.

Epstein has been splashed across the headlines since his arrest over the weekend, and many powerful men could be in the crosshairs of the Southern District of New York if Epstein decides to flip for a deal.

While discussing Epstein on “The View”, Goldberg wanted to know why evangelical leaders have been largely silent. After all, they are supposed to espouse “family values” and supposedly care about what happens to children, right?

“Do you know who I’m waiting to hear from?” Goldberg asked. “All those folks that are out there that talk about that they want to take care of young people and make sure young people are good. I just, you know, why isn’t the evangelical community coming forward? Where is everybody?”

Indeed, the evangelical community would be condemning Epstein to hell were it not for his close friendship with President Donald Trump, who has been accused of raping a 13-year-old girl at one of Epstein’s parties and has a history of creepy remarks about little girls.

“That was worrying me because I thought, well, one of the ways that you show that you care about people is you come out and you condemn this kind of stuff,” Whoopi continued. “But, you know, and all the folks that I’m used to hearing talk about, you know, this one is bad or this is bad or this — haven’t said much, and I was just wondering where they were.”

McCain then opened her mouth.

“I don’t think evangelicals are okay with pedophilia,” she claimed even though evangelicals have ignored Trump’s own lurid behavior toward little girls. She then accused Goldberg of blaming evangelicals for Epstein’s behavior.

“I think the evangelical community in this country is massive,” McCain said. “I don’t know the number, but it’s huge. So the idea that we’re going to blame evangelicals right now –”

Whoopi cut her off and explained that she is not blaming them at all, but is merely asking why they are refraining from speaking out against Epstein.

“Well, I feel like we have heard from the community, and the voices of the community quite a bit about a lot of different things — how I want to deal with my body, how you want to see your kid, whether children should be where — and I have been waiting for them to say, and by the way, this isn’t okay with us either,” she said.

That’s when McCain attempted to politicize the discussion as she always does all while insisting that the issue should not be politicized.

“He is a giant donor to a lot of Democrats, and he was very well-connected,” she said. “I don’t think this should be political or about religion.”

Again, McCain herself just made it political by trying to tie Epstein to Democrats, totally glossing over the fact that Epstein was a close friend of Trump’s for over a decade and is tied to many Republicans as well. And this is certainly a religious issue because evangelicals are silent on an issue of morality.

“This is my opinion,” Goldberg continued. “I’m just saying I would like to see some of the people that have been talking about all the ills in our country, I want to see them come out and say, yeah — this is one of them. Because it sounds like there is no response, and this is just me, in my head, asking.”

McCain herself brought up Jerry Falwell Jr., who has a pool boy problem, while Behar brought up Pat Robertson. Neither evangelical leader has condemned Epstein, nor have they condemned pedophilia.

“They’re not the folks that would be coming — yeah, that’s the thing,” Goldberg said, adding Franklin Graham’s name to the mix. “Franklin Graham, those guys. Those are the guys we’re talking about — leaders.”