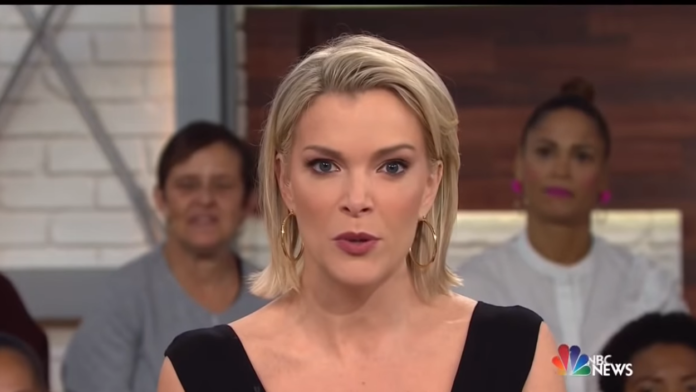 When she left Fox News and joined the team at NBC News, many of us wondered if Megyn Kelly was the right fit for her new network, especially in light of some of the ridiculous things she said while still employed by Fox.

And on Tuesday, Kelly proved again that our concerns were indeed warranted during a discussion of some universities in the U.S. banning Halloween costumes that are considered to be racist or culturally insensitive, with Kelly maintaining that it’s simply impossible to define exactly what’s racist:

“What is racist? You do get in trouble if you are a white person who puts on blackface on Halloween, or a black person that puts on whiteface for Halloween. Back when I was a kid, that was okay, as long as you were dressing up as, like, a character.”

NBC correspondent Jacob Soboroff attempted to explain to Kelly that while anyone free expression allows people to wear whatever costume they like, there may be consequences for doing so:

“If you think it’s offensive, it probably is. Whatever happened to manners and polite society?”

Despite what her guests had just said, Kelly again seemed to defend wearing offensive costumes, commenting:

“You’ve got guys with fake axes coming out of their head. It’s going to be jarring.”

Twitter quickly let Kelly know that her comments were downright ill-informed and ignorant:

I thought this might have been an exaggeration, but no, Megyn Kelly is really doing a “I don’t see what’s so offensive about blackface” https://t.co/xtECr43UMg

“Normal people know where that line is…” Thank you, Melissa Rivers…too bad @MegynKelly isn’t normal and perhaps not a person.

Ohhhhhhhhhhh!!!! So Halloween is like a “bye week’ for racism…. Like a one day Purge for blackface…..GOT IT! https://t.co/0ZPBGHJ6U0

Dear @megynkelly — you and I are approximately the same age. Blackface was NOT okay when we were kids. Take it from a big-hearted boy who just wanted to show his love for Nipsey Russell on the worst Halloween of my life. https://t.co/pnsk0WmuTw

Time for Megyn Kelly to head back to Fox. After all, they love this kind of willful ignorance.