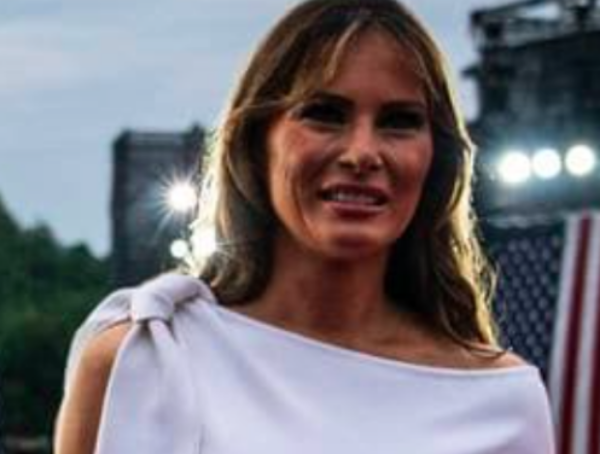 First Lady Melania Trump showed off her “assets” during President Donald Trump’s July 4th party on Thursday night, and became the instant main attraction at the event, which the rain turned into a wet T-shirt contest that she won.

Wearing a white dress during a pour down was not exactly a good idea, and neither was her decision to go without a bra as the rain made her dress see-through. And the Internet noticed.

Melania hasn’t been this wet since she sat next to Obama at George H.W. Bush’s funeral. pic.twitter.com/J6El5dr6Iz

Melanie’s kidneys are showing today. Someone should tell her the camera picks up everything. And, always wear a bra with solid white. #Melania pic.twitter.com/hD3dZ7d2Bj

A hard-faced hooker with no bra. Trash!
“This is your queen?!” #Melania pic.twitter.com/fyfEc3bzhw

Remember when the right lost their shit over Michelle Obama’s arms? I think they might have imploded if they saw her nipples. But we’ve all seen Melania’s nipples, so the right is cool w/ nipples. Maybe breastfeeding in public won’t be an issue for the Puritans anymore. #Nipples pic.twitter.com/7juMTAkgbR

The prez may not have a clue about American history, but Melania did win the Fourth of July wet T-shirt contest. #badhairday pic.twitter.com/VZn0BhOaQA

File under: “If Michelle Obama Had Done This.” pic.twitter.com/pVns2DQsgB

Indeed, conservatives threw a massive hissy fit when former First Lady Michelle Obama wore a sleeveless dress. Yet, they won’t utter a single criticism about Melania showing her nipples to the world during a televised July 4th rally.

If anything, this incident reveals conservative hypocrisy at its finest.

And this really would not be such a big deal but for how conservatives treated Michelle Obama and how they have constantly whined about women’s breasts over the years.

Surely, Melania has people around her who advised her on her attire for the evening, right? The forecast called for rain long before the event began yet she chose to go bra-less anyway and wore white. Still, conservatives have the nerve to compare Melania to Jackie Kennedy. The problem is that Jackie Kennedy would have known better and had true class.