The United States Blues
Home Business Meteorologist reveals that most people can’t locate their own home on a... 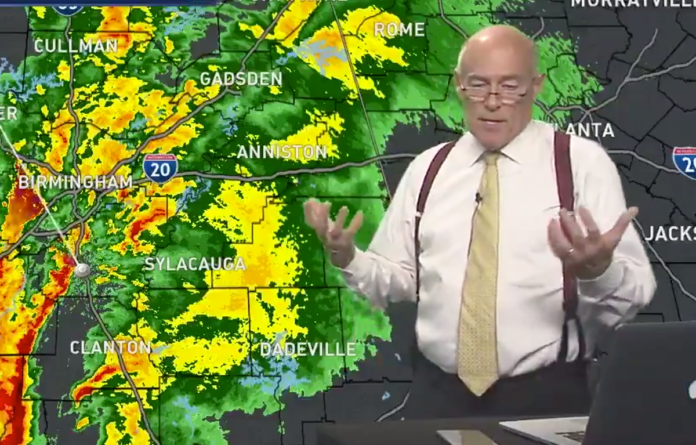 Society’s dependence on smartphones and GPS systems seems to have a pervasive and potentially dangerous side-effect. One frustrated Birmingham, Alabama weatherman, James Spann says there is now a big problem: Most people can’t locate their own homes on a map. The meteorologist noticed the problem seemed to get worse a few years ago but the topic has frustrated those in the “weather enterprise” for years.

In an ABC 33/40 News segment, Spann had a “Fireside Chat” in which he called out an apparent geography literacy problem in America. The weatherman says he’s noticed that most people today can’t do what students used to do as early as second grade.

“We have learned that a large percentage of people in our state and many states cannot find their house on a map,” he says.

“If I were to give you a blank map with no labels, no highways, just county lines, and state lines, could you draw a dot within 50 miles of your house?”

“We’ve seen some studies that about 85% of the population can not do that.”

Spann says that when he posts “easy to read” weather maps on social media, the first responses are from multiple people who want to know if the weather will affect their town. Soon, he is inundated with a thousand requests for individual briefings on the weather.

Confused people would ask over and over, “What about [my town?]”

The problem is serious because, without basic map skills, the forecasters can’t communicate effectively with the audience. Spann’s comments came after a night of severe thunderstorms and tornadoes moved across Alabama on April 14. A tornado watch was under effect for north and west Alabama, but some viewers weren’t sure if the watch applied to them.

“You need some basic map skills to help us communicate some critical severe weather information,” he said.

“It would really help if you could identify the county that you live in and the counties adjacent to you,” he explained.

“It really doesn’t take that much. I learned it in fourth grade,” he continued.

Hear his comments below:

.@spann Fireside Chat: Many people can't find themselves on a map. pic.twitter.com/IEzUXBNhD5

According to WBUR, Spann has verified the geography literacy problem by conducting experiments when he visits local rotary clubs and other venues.

“I would give them a blank map with county lines and state lines, and I would say put a dot within 50 miles of your house,” Spann (@spann) tells Here & Now’s Jeremy Hobson. “In most every situation, at least 60, 70 percent could not do it.”

As natural disasters and severe weather become more common due to climate change, it becomes vital for people to find their location on a map issued in weather alerts.

“If you can’t identify where you live on a map, you’re just in big trouble.” says James Spann.

Finding your location on a map can be crucial to heeding weather warnings. Director @DrLauraMyers explains why. https://t.co/8LQCqE4yNv

Dr. Laura Myers, the director of the Center for Advanced Public Safety at the University of Alabama, has backed up Spann’s claims with research. Through surveys, interviews, focus groups and workshops across the Southeast, researchers found that some surprising things:

“First and foremost: Most people DO know where they live.”

Even though they know where they live, they are unable to translate that into locating themselves on maps thanks to dependence on tech.

“People are not using maps anymore,” she said. “They’re allowing their cellphones and their GPS to tell them where to go. So it’s the really the lack of usability of maps.”

Spann is encouraging educators to include lessons about basic geography and how to locate their homes and surrounding counties on maps.

“I have had countless photographs of second-grade classes and third-grade classes where the kids are showing, ‘This is where I live. I’m pointing to it,’ ” he says. “At least this conversation can spark some interest perhaps in those that are teaching our children, where they really do need some map skills coming out of school.”

Mrs. Conerly’s class learning how to read maps and how to locate home. #SVEnext @spann pic.twitter.com/52oPvgHDhC

Meanwhile, Dr. Myers has recommended that broadcast meteorologists, emergency managers, and the National Weather Service issue maps before major weather events. That way, the public can become familiar with the map and locate where they are before bad weather strikes and there is a rush to take cover or evacuate. Already, the idea is getting good feedback after implementation over the last weekend. It’s a better way to prepare audiences and familiarize them once more with maps.

“So we’ve been watching them do it, and it’s been receiving a lot of good feedback. It’s a lot of good preparedness information,” said Myers. “So we’ve gotten their attention, and all of them recognize that it’s a problem, and they’re all trying to do these things that help their public do better with maps.”

INTERESTING STAT: We traveled to a local high school & asked 100+ students to circle the county they lived in on an AL map. *Less than half* of them could locate their home county. Folks, we can't stress this enough – 🗺geography is a VITAL part of your #SeverePrep plans! #alwx pic.twitter.com/ULpaZnYlX5