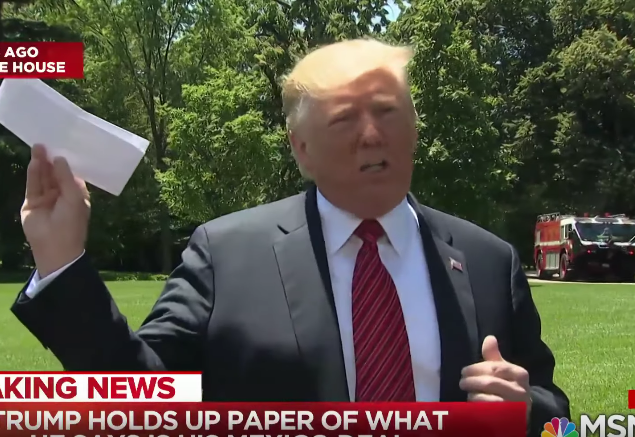 President Donald Trump claimed to have a copy of a “secret deal” he supposedly made with Mexico as he claimed our southern neighbor would stop illegal immigration and start buying more agricultural products from our farmers. Mexico just blew those claims out of the water by releasing the text Trump didn’t want reporters to see.

The New York Times reported that the “agreement” Trump bragged about had already been done months ago long before he threatened to slap tariffs against Mexico unless they made a deal.

Still, Trump waved a single sheet of paper in the air in front of reporters earlier this week bragging about having a deal that everybody says he doesn’t have, but refused to show it to anyone.

In the end, Mexico released the full text of Trump’s supposed “deal” and humiliated him in the process.

Basically, the agreement is for both nations to engage in further negotiations in the future, while Mexico agreed to review their own immigration laws. The agreement says nothing about purchasing produce from American farmers.

Well, Mexico just released the full page that @realDonaldTrump carried when he said there was a secret agreement pic.twitter.com/A5ocd4WV6p

Seriously, that’s it. That’s the entirety of the “deal” Trump bragged about. This is nothing more than an agreement to hold further discussions. There’s nothing substantial to brag about, yet Trump made it sound like Mexico capitulated to all of his demands. In reality, he achieved nothing and got busted for lying as usual. It’s no wonder why he didn’t want to show the letter to the press. Because he knew the press would skewer him for being a liar about a fake deal that does not exist.

This should outrage the American people, particularly farmers since Trump offered them a fake light at the end of a tunnel that remains dark. All Trump did is prove that he’s a fake president who has no clout whatsoever when it comes to diplomacy and foreign policy.