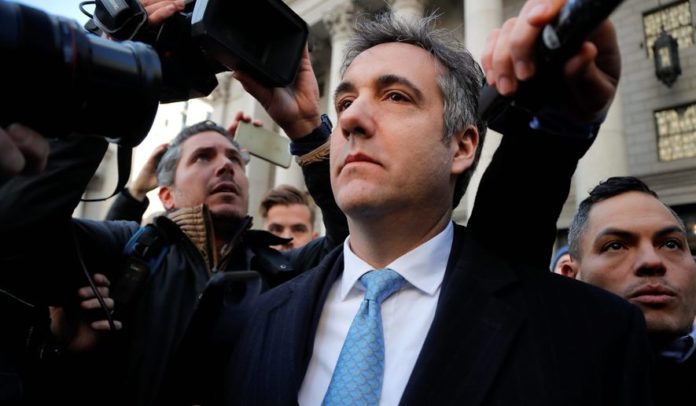 President Donald Trump’s former fixer Michael Cohen has implicated his former boss in yet another scheme to help him win the 2016 Election.

In addition to committing campaign finance felonies at the direction of and in coordination with Trump in 2016 to hide Trump’s extramarital affairs from the American public, Trump’s former personal lawyer also paid off an IT firm to rig online polling in Trump’s favor.

According to a new bombshell report by the Wall Street Journal:

“In early 2015, a man who runs a small technology company showed up at Trump Tower to collect $50,000 for having helped Michael Cohen, then Donald Trump’s personal lawyer, try to rig online polls in his boss’s favor before the presidential campaign.

“In his Trump Organization office, Mr. Cohen surprised the man, John Gauger, by giving him a blue Walmart bag containing $12,000 to $13,000 in cash and randomly, a boxing glove that Mr. Cohen said had been worn by a Brazilian mixed-martial arts fighter.”

The scheme was also included in an indictment issued in August 2018.

In response to the publication, Cohen took to Twitter and directly implicated Trump:

As for the @WSJ article on poll rigging, what I did was at the direction of and for the sole benefit of @realDonaldTrump @POTUS. I truly regret my blind loyalty to a man who doesn’t deserve it.

Cohen also implicated Trump, who is named as an unindicted co-conspirator, in the campaign finance felonies in a plea deal struck with federal prosecutors.

This revelation comes as he prepares to testify in Congress next month in what could be damaging public testimony to Trump, especially if a tweet by Mother Jones’ David Corn that Cohen shared is any indication of what’s to come:

.@RepCummings announces @MichaelCohen212 will publicly testify on 2/7. Much to ask him beyond hush-money payments/campaign finance crime. Cohen can discuss Trump dealings in Russia & reaching out to Putin’s office. And so much more. Buckle up.

Trump has to be seriously frightened of his former lawyer right now. Because if Trump was willing to commit campaign finance felonies and pay to rig polls, it’s not a stretch to believe he would stoop to colluding with Russia in a desperate effort to win in 2016.