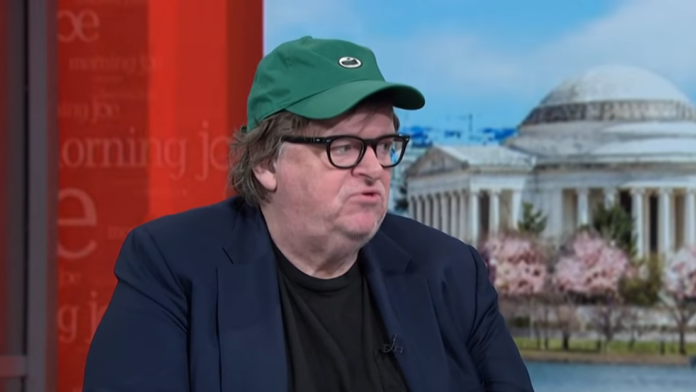 Even after Cesar Sayoc had been arrested and charged as the person who allegedly mailed over a dozen pipe bombs to Democratic political figures and news organizations, some on right-wing media — including Fox News — continued to suggest that Sayoc might not actually have gone on his terror spree due to anything President Donald Trump has said since taking office.

And that, according to Academy Award-winning documentary filmmaker Michael Moore, proves that Fox is also partially responsible for ginning up the kind of conspiracy theories that have spawned and nurtured extremists on the far right.

In a statement he sent to the Hollywood Reporter, Moore noted one of the photos Sayoc had posted on the side of his van included his:

“The accused bomber plastered a picture of me on the side of his van, with a crosshairs target over my face. Actually, the target is over my neck, which I’ll take as a minor concession on his part.”

Former Secretary of State Hillary Clinton’s picture was also on Sayoc’s van windows, and it took had a crosshair target across it. Another sticker bore the logo: CNN SUCKS. And that, Moore asserted, is a direct result of the venom spewed daily on Fox and its affiliates:

“The threat of right-wing violence against figures on the American left is not new. It is not an aberration. It is not a violation of norms. It IS the norm. Rupert Murdoch’s Fox News Channel and right-wing radio have preyed upon those who’ve seen their American Dream go up in smoke, and they have helped to create a generation of angry and violent conspiracy theorists who will believe any lie that is perpetrated on those airwaves. These angry right wing men have been openly encouraged to act on those lies, even as late as this very morning when Trump was tweeting his doubts that the bombs were real.”

The antidote to the right-wing hatred, Moore concludes, is for those who care about this country to get out and vote in the midterms:

“Sadly, the new and dangerous dynamic of political violence in America is that it is now promoted and encouraged by the President of the United States. We must vote out of office all enablers of this man and the violent culture he instigates and nurtures. There are millions and millions of us who will never be intimidated, who will never back down, and who will show up on Election Day.”

Donald Trump is only as powerful as we allow him to be. If we place a check on him with a Congress controlled by Democrats, his ability to destroy this nation will be greatly reduced. Vote like your life depends on it; it very well may.