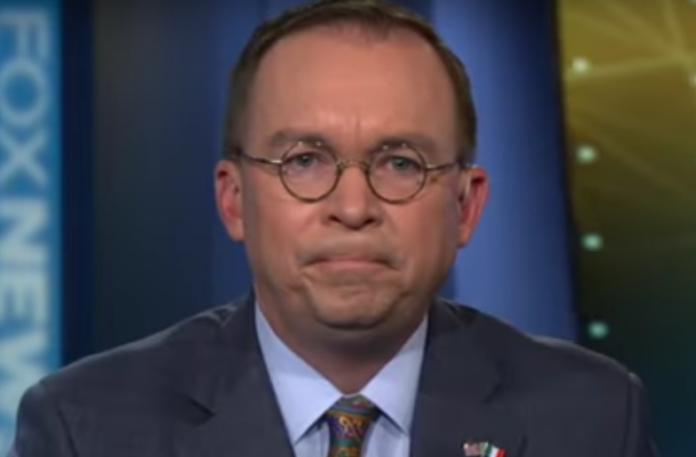 White House chief of staff Mick Mulvaney went to bat for President Donald Trump on Fox News Sunday as Chris Wallace grilled him about the New Zealand terrorist attack carried out by a Trump-supporting white nationalist.

So far, Trump has refused to condemn white nationalism and has continued to spew anti-immigrant and anti-Muslim bigotry, both of which were major factors in the attack that killed 49 people this week.

During an interview with Mulvaney, Wallace began by showing him what the shooter wrote about Trump in his manifesto.

“Were/are you a supporter of Donald Trump? As a symbol of renewed identity and common purpose? Sure.”

“I don’t think it’s fair to cast this person as a supporter of Donald Trump any more than it is to look at his — sort of his eco-terrorist passages in that manifesto that align him with Nancy Pelosi or Ms. Ocasio-Cortez,” he said. “This was a disturbed individual, an evil person, and to try and tie him to an American politician from either party probably ignores some of the deeper, difficulties that this sort of activity exposes.”

Just because the shooter doesn’t agree with most of Trump’s policies, it doesn’t mean he was not influenced by Trump’s bigotry and hateful rhetoric, which Wallace showed examples of.

In response, Mulvaney chuckled as he denied Trump is a white supremacist.

“You’ve seen the president stand up for religious liberty, individual liberty,” he said. “The president is not a white supremacist. I’m not sure how many times we have to say that. And to simply ask the question, every time something like this happens overseas, or even domestically, to say, oh, my goodness, it must somehow be the president’s fault speaks to a politicization of everything that I think is undermining sort of the institutions that we have in the country today.”

“Let’s take what happened in New Zealand yesterday for what it is. A terrible evil, tragic act and figure out why those things are becoming more prevalent in the world. Is it Donald Trump? Absolutely not,” he concluded before going on to blame social media.

The problem, once again, it that Trump still refuses to condemn white nationalism, and he cannot claim to be a proponent of religious liberty if he attacks Muslims all the time. Federal authorities have repeatedly warned that white nationalism is a growing terrorist threat across the country and around the globe and Trump is clearly ignoring it because white nationalists make up a large percentage of his backers. Trump has also used a lot of the same language used by the shooter in New Zealand, including calling immigrants “invaders” and demonizing Muslims.

Just the fact that Mulvaney has to deny that the president of the United States is a white nationalist should be a major concern to the American people. Trump may not have pulled the trigger himself, but he still has blood on his hands.