The United States Blues
Home National News Mick Mulvaney: Trump caved on demand for a wall because he was... 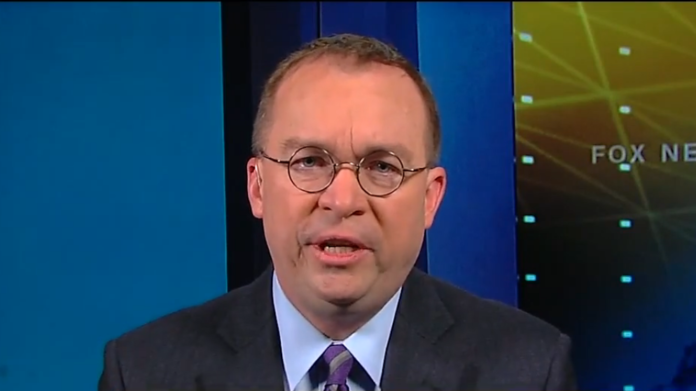 Acting Chief of Staff Mick Mulvaney was on Fox News Sunday morning trying desperately to put a positive spin on the capitulation by his boss earlier this week on the issue of the government shutdown, which Trump agreed to end without securing a penny for his long-promised wall on the Southern border.

Host John Roberts asked Mulvaney about Trump’s actions on Friday, when he agreed to reopen the government:

“Did [Trump] cave to the Democrats? I think a lot of Republicans think that he capitulated here, because he really came away from 35 days of a government shutdown with nothing more than he could’ve had at least two weeks ago when Senator Graham proposed the same thing and maybe even back to before this whole thing started.”

Mulvaney tried desperately to suggest that Trump’s signing a three-week spending bill was actually a victory for the White House:

“No, I think what you’ve seen here is the president seeing an opportunity. Why he did what he did was because many Democrats had come to us, some of them privately, many of them spoke out publicly, that they are actually starting to agree with him on the necessity for a barrier on the southern border, and they had come to us and said Look, we agree with you, you’re winning the battle on the importance of a barrier on the southern border, but we simply cannot work with you while the government is open, excuse me, while the government is closed.”

Hmm…so when you’re winning the debate you fold your hand and give your opponent what he or she wants most of all? Good thing Trump doesn’t play high-stakes poker or he’d have had to declare bankruptcy every other week.

Despite what Mulvaney says, right-wing acolytes who have long supported the president said they were furious that Trump had agreed to demands from Congressional Democrats. Even longtime Trump worshiper Ann Coulter called Trump the biggest wimp in presidential history:

Good news for George Herbert Walker Bush: As of today, he is no longer the biggest wimp ever to serve as President of the United States.

How do you know you’re losing the battle? When your own troops start firing on you.