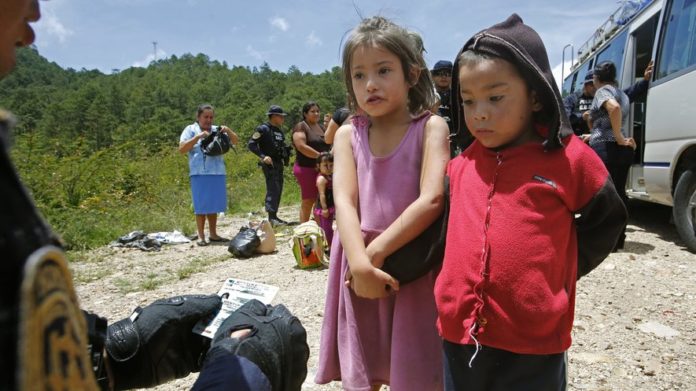 As the Trump administration continues to hold immigrant children against their will while they either deport their parents or hold them at separate detention facilities, the full toll of President Donald Trump’s inhumane policies is leading to horrific abuse in foster homes the migrant kids are placed in, according to a disturbing report from the Associated Press (AP).

The AP reviewed 38 legal claims alleging that migrant children have suffered emotional trauma after being physically harmed or fondled by other children in the foster homes:

The records released by Congress show the Office of Refugee Resettlement referred at least seven foster care allegations of sexual abuse to the Justice Department in 2017 and 2018. Because some are anonymous to protect the children’s privacy, it’s unclear if some of the claims are duplicates.

Three of the four incidents involving physical harm outlined in legal filings occurred at Cayuga Centers in New York, the largest foster care placement for migrant children, housing up to 900 babies and children at a time. The kids are supposed to be placed with Spanish-speaking families who are paid $1,000 per month per child.

And these are just the cases that have been reported, according to Erik Walsh, an attorney at Arnold & Porter, who is representing some of the children in lawsuits filed against the foster homes and federal government agencies:

“It’s the tip of the iceberg.”

Accounts of the abuse detailed in the lawsuits are both terrifying and heartbreaking.

In the case of one young girl, who was three when she was abused:

A foster parent found a little girl being forced to touch another child’s private parts and kiss her on the lips, according to a memo submitted as part of a federal lawsuit related to family separation.

The girl was 3 when immigration officials took her from her father in March, after they’d crossed the border in Texas. As a result of her trauma, the little girl began to regress in foster care, having difficulty eating, drinking and using the toilet, according to her attorney. The girl was sent back to Honduras on Wednesday, a month after her father was deported.

Another case involved a 5-year-old who still wakes up crying from what she endured in foster care, according to her mother:

“Now she’s scared each time we go out or when she sees a police car or someone in uniform,” said the mother, who has filed a $6 million claim. “She says ‘Mami, don’t let them separate us again.’”

Health and Human Services  — the agency responsible for the care of migrant children — had this to say about the foster care abuse in a statement to the AP:

“The important work happening in each of the facilities and programs in the ORR (Office of Refugee Resettlement) network around the country — work ORR has done successfully since 2003 — takes an experienced team of competent, hardworking men and women dedicated to the welfare of the children. We treat the children in our care with dignity and respect.”

Dignity and respect? Is that what they call the sexual abuse of innocent children in the Trump administration?