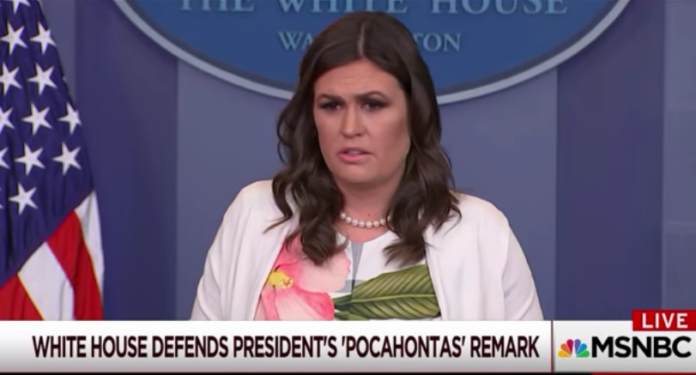 Donald Trump sunk to a new low on Monday, and White House Press Secretary Sarah Huckabee Sanders went down with him.

“I just want to thank you because you are very, very special people,” Trump said. “You were here long before any of us were here. Although, we have a representative in Congress who has been here a long time … longer than you — they call her Pocahontas!”

The use of the word offended people across the country, especially Native Americans.

But rather than condemn Trump’s racism, his White House mouthpiece attempted to defend him.

Elizabeth Warren claimed to have Native American ancestry during her Senate run against Scott Brown in 2012, which led to racial taunts by conservatives. Warren responded to Trump’s attack on Facebook by writing that she “learned about my family’s heritage the same way everyone else does – from my parents and grandparents. I never asked for and never got any benefit from it.”

So, Warren does believe she has Native American ancestry. She wasn’t lying to further her career. She was just honest with voters about what she knows about her family tree.

“When is there going to be a moment where she says the president misspoke?” Brzezinski began. “What’s wrong with her? Why does she do that job? How can she look in the mirror every day and say, ‘I am doing the right thing for the American people?’ Because you are not — you are not. This is Kellyanne Conway territory. This is horrible.”

“That is unbelievable,” she continued. “This is our president, and that is the spokesperson for the president of the United States sitting there, defending his racism, his bigoted language, his stupidity. This is where we are. It’s sick. The whole thing is sick. The whole relationship is sick. She’s taken the oath. I don’t know how you do it. You are raising three children. Stop. I cannot watch a woman do out there and shill for this president and shill for his racism and bigotry. It is so painful. We do not need this.”

This comes a day after Morning Joe ripped Trump for putting the lives of American journalists at risk around the globe by attacking the media.

The White House has not had a good week since Trump’s return from his Thanksgiving golf vacation. And it’s only a matter of time before Trump attacks Morning Joe again, so the White House better be prepared for more fires.