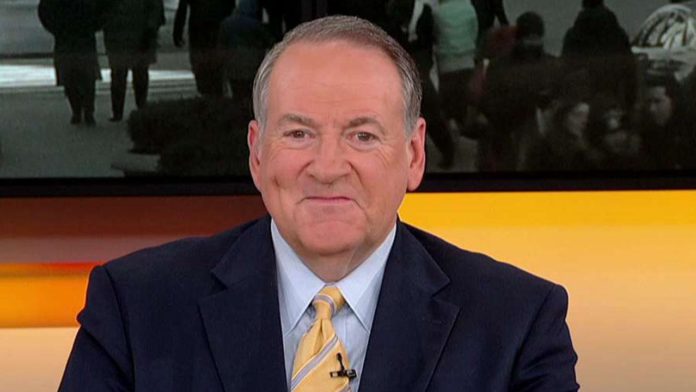 Former Arkansas Governor and Fox News contributor Mike Huckabee disgustingly blamed a “lack of thoughts and prayers” for the bloody mass shootings that left 29 people dead in El Paso and Dayton over the weekend.

White nationalist terrorists were incited by President Donald Trump’s hateful and racist rhetoric to commit these slayings, and they took advantage of America’s lax gun laws to do it.

People are dead, and the GOP has blood on their hands for refusing to do anything to prevent future violence by only offering “thoughts and prayers.”

“Despite all those who are denouncing the idea of prayers for the victims (do a Google search for “Thoughts and prayers are not enough” and see how many hits you get), I will continue to pray for the victims and their families and for an end to this mindless violence, and I hope you will, too,” he wrote on his website. “In fact, amid all the finger-pointing and blame-laying and repulsive attempts to turn these tragedies to political advantage before the bodies are even cold, I would posit that the lack of thought and prayers is probably the single biggest factor in what is behind them.”

Huckabee went on to defend Trump, claiming that he can’t possibly be a racist because he says so, which is pretty damn weak. He even tried to claim that Trump never said that Mexico is sending criminals to the United States, but that MS-13 is.

In June 2015 when Trump announced his presidential campaign, he did not even mention MS-13 in his diatribe against immigrants, taking aim specifically at Mexico.

Here’s the video proving how much of a complete lying a**hole Huckabee is:

He also tried to blame abortion and the media for the shootings even though there is absolutely no evidence linking either to acts of terrorism. Huckabee must be truly desperate to earn that NRA money.

Huckabee then trotted out another right-wing trope by bringing up gun violence in Chicago because the city is in a blue state with strict gun laws. What he fails to mention is that people simply cross the border into Indiana, which has weak gun laws, and bring guns back into the city. It should also be pointed out that Chicago once had a handgun ban but the Supreme Court struck it down, resulting in an increase in violence.

In the end, he called for indoctrinating kids into Christianity to prevent mass shootings by insisting that laws won’t work even though they work damn well in every country that has banned firearms such as the United Kingdom, Japan and Australia to name a few.

“This is never going to end until we have a reawakening of morality and values, and until kids are brought up once again to believe that we are all made in the image of God, that life is sacred and superficial differences like skin color are meaningless,” Huckabee said ironically even as Trump goes on racist tirades against black lawmakers.

“That won’t happen until we once again accept that children need to be raised by parents and guided in moral instruction, to be taught the Golden Rule and the Ten Commandments, to treat each other with respect and decency, and to work and socialize together, in schools, community organizations and places of worship, not just online,” he concluded. “Until then, passing more laws and pointing more fingers is just rearranging the deck chairs on the Titanic. That’s why I will keep ignoring the scoffers and saying prayers and urging everyone to join together and do the same. It’s not a meaningless gesture. It’s the only thing that’s ever really going to help.”

Interestingly, he brings up the Titanic. After the ship tragically sank, new laws were passed that significantly increased ship safety.

According to the Krist Law Firm in Houston:

After the sinking of the Titanic, the British and American Boards of Inquiry decided that ships should carry enough lifeboats for everyone on the ship. There would also be required lifeboat drills and inspections to divert another mass boat-sinking accident…With the passing of new policy, ships now had better safety procedures and construction, constant contact with others on the sea and coastal radio stations.

Society did not just ignore the real problems with ships and pray for them to go away. They did something about it. That’s what we need to do when it comes to mass shootings. We need to do something real to solve the problem by passing laws. Prayer just is not the answer. It’s a cop-out by fake preachers like Huckabee who get paid to have blood on their hands.