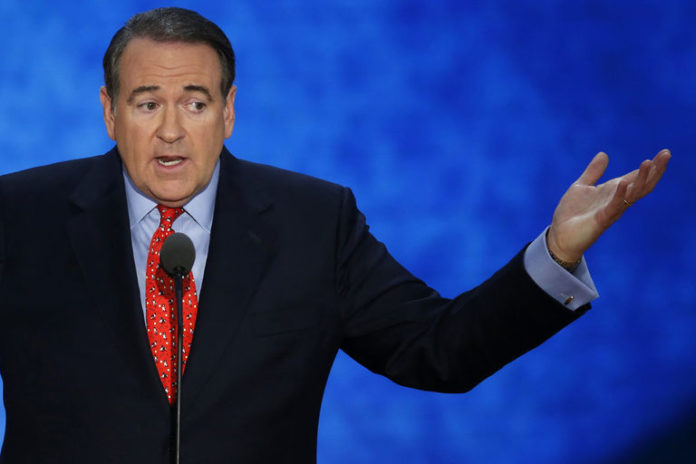 For some reason, former Arkansas governor and failed GOP presidential contender Mike Huckabee seems to think he has a stellar sense of humor that others will also find irresistible.

But as was proven true again this week, Huckabee isn’t the least bit funny. As a matter of fact, his jokes usually blow up in his face.

Huckabee decided he’d comment on a story about a prank pulled by 2020 presidential candidate Beto O’Rourke in which he placed some baby poop in a bowl and told his wife it was avocado. That led Huckabee to post this on Twitter:

Bob “Beto” O’Rourke has a more understanding and forgiving wife-he once put baby poop in a bowl and told his wife it was guacamole. If I did that, there would be a small hole in my forehead and a large gaping hole in back of my head–the exit wound! https://t.co/iaclY15luJ

Really, Mike? That’s supposed to be funny? It isn’t. Not in the least. It’s just plain disgusting, and it only makes you look more foolish and petty than you normally do.

here we see comedy brain genius mike huckabee taking a very weird beto thing and managing to turn it into a side splitting and very graphic joke about uh shooting your spouse in the head https://t.co/CgAX4AsCWE

Thanks for being a constant reminder of how painfully unfunny and embarrassingly lame conservative comedy is.

The best part of any joke is explaining the joke.

Sounds like a good plan to me – give it a try, Mikey.

And conservatives wonder why they can never get a right wing comedy show launched.

Congratulations! Your Tweet will be included in a study on the lameness of authoritarian humor.

Moral of the story: Sarah Sanders mom is crazy and can’t take jokes, Beto’s wife is loving and forgiving. I don’t think that is news to anyone, after all we know Sarah. You once said somebody need to aim a gun at Barack Obama, yet he forgave you.