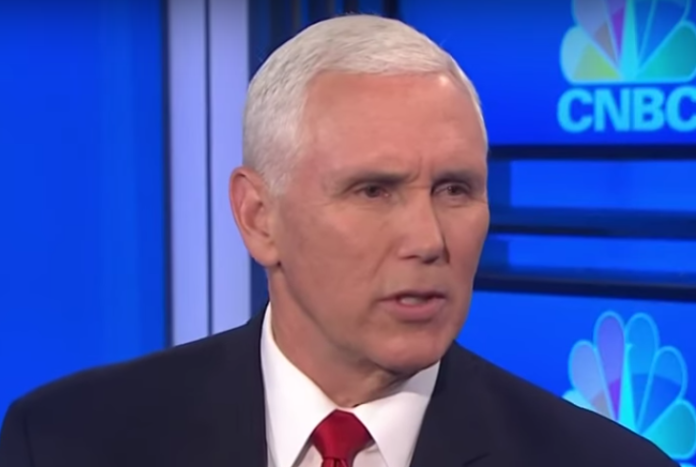 Vice-President Mike Pence played the victim card on Thursday during an interview on CNBC by accusing Democratic 2020 candidate Pete Buttigieg of attacking his religious beliefs.

As we all know, Pence is an anti-gay bigot who uses his religion as a shield. Buttigieg is the openly gay mayor of South Bend, Indiana who is hoping to become the Democratic 2020 nominee.

On Sunday, Buttigieg slammed Pence for his bigotry toward LGBT people.

“That’s the thing I wish the Mike Pences of the world would understand is that if you got a problem with who I am, your problem is not with me — your quarrel, sir, is with my creator,” he said.

Buttigieg would go on to point out on Twitter that just because Pence acts like a nice guy, it doesn’t give him a pass for his discriminatory anti-gay agenda.

People will often be polite to you in person, while advancing policies that harm you and your family. You will be polite to them in turn, but you need not stand for such harms. Instead, you push back, honestly and emphatically. So it goes, in the public square.

On Thursday, when he wasn’t busy repeatedly kissing President Donald Trump’s a**, Pence had a chance to respond, and he blew it.

“He said some things that are critical of my Christian faith and about me personally,” Pence claimed. “And he knows better. He knows me.”

“My family and I have a view of marriage that is informed by our faith and we stand by that, but that doesn’t mean we’re critical of anyone else who has a different point of view,” he continued.

Of course, Pence is lying. Even after the Supreme Court ruled that same-sex marriage is legal, he signed a so-called “religious freedom” law that allowed businesses to discriminate against LGBT people. And Pence has carried his anti-gay agenda to his current role within the administration. It’s one thing to have a religious belief, but applying that religious belief to the civil laws of our country is the problem. Buttigieg was not attacking Pence’s religion, he was criticizing his bigotry.