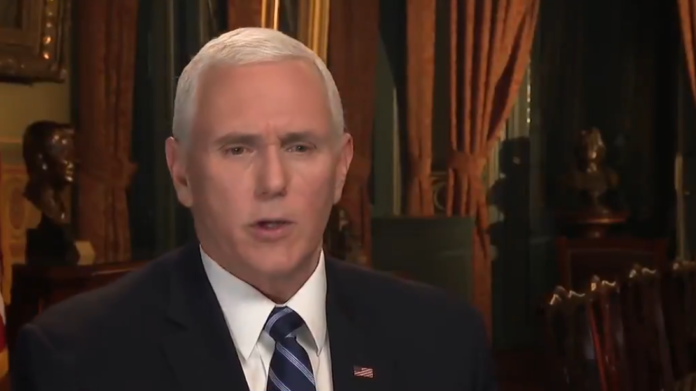 Vice President Mike Pence repeated a lie about terrorists crossing in large numbers at the Southern border during an appearance on the “Today” show and then tried to compound the matter with yet another lie.

Speaking with Hallie Jackson of NBC News, Pence began with a preview of what President Donald Trump will say during his Oval Office address later this evening:

“What I expect the president to do tonight is to explain to the American people that we have a humanitarian and security crisis at the border.”

And then Pence used the bogus figure that 4,000 terrorists have been caught trying to cross into the United States from the border with Mexico, even though NBC News proved conclusively that only six suspected terrorists have been apprehended trying to enter the U.S. from Mexico. When Jackson called Pence out for his blatant fabrication, the VP tried to move the goalposts, commenting:

“I was saying, it is from all ports of entry. Last year alone on the southern border, 3,000 special-interest aliens were apprehended trying to come into our country. Those are individuals whose travel patterns or backgrounds represent the need for additional screening and represent a potential security threat to the United States of America. There are two different categories, and they often get conflated.”

A “special interest” person is someone attempting to enter the U.S. from a “suspect” country, usually countries in the Middle East. But just because a person happens to be from Egypt, Iraq, or Iran doesn’t make them a terrorist.

Pence also whined that the number of immigrants seeking to enter the U.S. is overwhelming Customs and Border Patrol agents:

“The vast majority of those people now are families and unaccompanied children and it’s simply overwhelming the ability of our Customs and Border Patrol to address it.”

But what Pence failed to address is that his boss and others in the administration cannot be trusted to tell the truth when it comes to the issue of immigration, the wall, or virtually any other matter. They’ve lied so much and so often that they’ve lost any shred of credibility they might have once had.

One thing it’s safe to expect from Trump when he addresses the nation this evening: There will be more lies and almost no facts. In other words, it’s just another day at the White House.