The United States Blues
Home News Mike Pence starts a Twitter feud with Eric Holder and gets his... 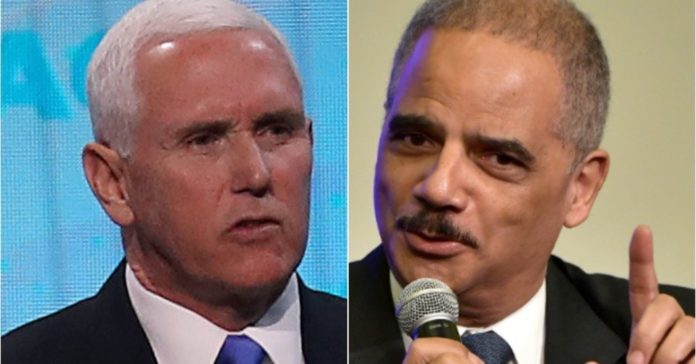 The back and forth between Pence and Holder began when Holder appeared on “The Beat With Ari Melber” Thursday and noted that the Trump tagline for the 2016 campaign suggests that America was never great:

“You know, America has done superb things, has done great things, and it has been a leader in a whole range of things, but we’re always a work in process. Looking back, ‘Make America Great Again’ is inconsistent with who we are as Americans at our best where we look at the uncertain future, embrace it, and make it our own.”

.@EricHolder: “Exactly when do you think America was great?” pic.twitter.com/pFE5z5D756

Can’t you just picture the VP sitting in his office with a smug grin on his face, certain he’d put Holder in his place? That self-satisfied smugness didn’t last long, however, as Holder retorted perfectly:

America IS great. And can-and must-be greater still. “Make America great again” means YOU think America is not great now-and is backward looking. America is at its best when we look forward, embrace an uncertain future and make it ours. That is what defines American greatness https://t.co/ASagCEPMZ5

Pence still hasn’t responded to the former AG. He’s probably sitting in a dark room somewhere crying and trying to think up something that doesn’t make him look even more ridiculous.