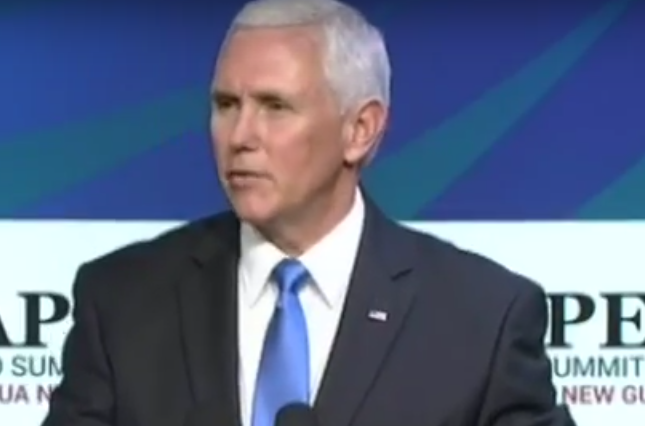 Trump began leveling tariffs against China earlier this year topping $250 billion, resulting in retaliatory tariffs and other measures such as the Chinese no longer buying soybeans and other agricultural products from American farmers.

The tariffs have also put pressure on American businesses, some of which have moved production overseas or have cut their workforce to avoid higher costs. Trump’s trade wars have especially hit red states hard.

And there’s no end in sight as Pence doubled down on the tariffs on Trump’s behalf in New Guinea this week:

“We have taken decisive action to address our imbalance with China,” Pence said. “We put tariffs on $250 billion in Chinese goods, and we could more than double that number.”

Doubling the tariffs would do even more harm to the economies of both nations, and the question is which country’s citizens are willing to stand the burden the longest until the other blinks.

“The United States, though, will not change course until China changes its ways,” Pence continued. “China has taken advantage of the United States for many years. Those days are over.”

Pence also accused China of drowning Asian nations in debt in order to gain power over them:

“We don’t drown our partners in a sea of debt, we don’t coerce or compromise your independence,” Pence claimed. “The United States deals openly and fairly. We do not offer a constricting belt or a one-way road.”

Except that Trump has used economic threats against our own allies in order to make demands, such as threatening to pull military aid and other funding from nations for making decisions Trump doesn’t like. It’s also laughable for Pence to talk about debt considering Trump has increased the national debt by trillions and the deficit has blown up due to his tax cuts for the wealthy. In fact, America is dependent on China because the Chinese are our top creditor. China currently holds over $1 trillion in U.S. debt.

Chinese President Xi Jinping responded by warning about the dangers of trade wars in his own speech, pointing out that there are no winners in such a war:

“History has shown that confrontation, whether in the form of a Cold War, hot war, or trade war will produce no winners,” he said.

Indeed, Trump’s trade war is having a negative economic impact here in the United States. Doubling down on them will only double down on the pain Americans are already feeling at a time when the economy should be seen positively. Instead, Trump is threatening the economic progress by engaging in trade wars even though trade wars contributed to deepening the Great Depression in the 1930’s.

Pence and Trump can continue threatening China, but the cost to Americans will be high. And that could hurt Republicans big in 2020, especially if the economy slips in the next two years.