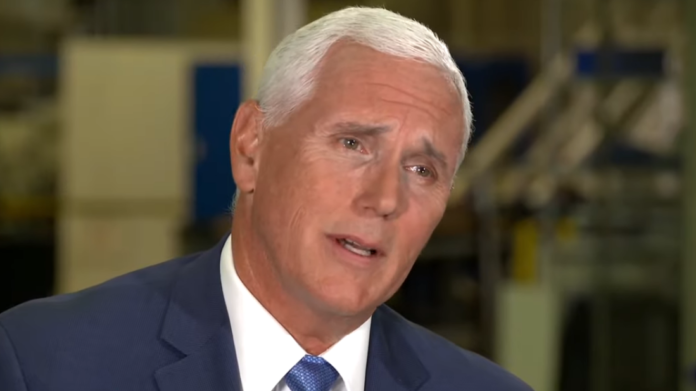 Thanks to former White House aide Omarosa Mangault Newman, we now know that there are section leaders at each Trump rally who are tasked with urging the crowd to chant and also leads them in certain chants. And one of those section leaders is none other than a man named John Pence, who just so happens to be the nephew of Vice President Mike Pence.

“I had to attend many of these rallies when I worked on the campaign and even in the White House. There are these section leaders who start the chant, control how long the chants go and quiet them down when they want to.”

These leaders, Newman added, are embedded in the rally crowd:

“In fact, you’ll be surprised to learn that Vice President Pence’s nephew, John Pence, is one of the big coordinators of these rallies. And so this is how closely these rallies are coordinated with also what’s going on in the White House. John Pence is a very big key player in the campaign, but he’s particularly responsible for all of the staging and choreography of the campaigns and, yes, they are very much orchestrated and manufactured to get the outcome that we saw from Donald Trump saying go back to your countries that you came from and if you don’t love it, leave it.”

That led Sharpton to ask: If section leaders can shut down chants, why didn’t John Pence do that during this week’s rally in North Carolina when the crowd began shouting “send her back”?

“If he wanted to shut it down, he would have looked to his right which is where the lead is standing, and he would have given a signal. They would have been shut down immediately. The way that he stepped back and he basked in the glow of these ugly chants, it indicated to the section leaders to let them keep going, to stoke them up, to keep it going.”

In fact, Newman went on to note, it’s very likely that section leaders such as the VP’s nephew were either chanting “send her back” with the crowd or even leading the chant:

“I think it would be important to have cameras kind of pan to the crowds at the next rally and you will see the orchestration, the coordination and how they manufacture this environment that makes Donald Trump look like this horrible leader that he is because he loves it. You saw him basking in it because that is the end result that he was going for.”

Trump said he didn’t like the chant, yet he later called the people who were demanding that Rep. Ilhan Omar (D-MN) be returned to Somalia “great patriots” for what they did. It can’t be both, so that means one of those statements is a blatant lie. Based in Trump’s past actions and comments (i.e. Mexicans being “rapists,” Muslims being terrorists, etc.) there can be little doubt that he loved the chants at the North Carolina rally and may have even had members of his staff prompt the crowd to say what they did.

As for John Pence, it’s clear that much like his uncle, his idea of “Christianity” is based on hatred, division, and racism.

Here’s the video. The segment with Omarosa begins at the 25:00 mark: