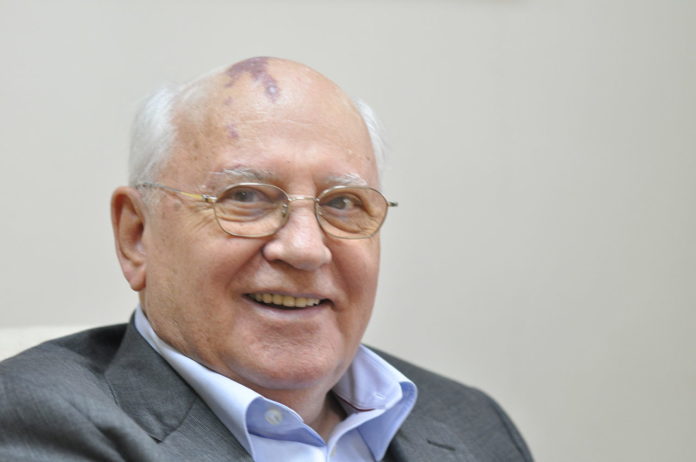 The INF Treaty signed by Gorbachev and former President Ronald Reagan represented a shift in the Cold War and a significant step toward nuclear disarmament that has continued to this day.

That is, until Trump killed the treaty earlier this week in a move that may be the spark to a new arms race that once again puts the world on the brink of nuclear Armageddon.

It’s part of a plan Trump announced in the beginning of the year when he said that America would no longer lead the way in ridding the world of nuclear weapons.

Gorbachev had earlier blasted Trump’s decision as “not the work of a great mind,” only to take aim at Trump again in a New York Times op-ed on Thursday arguing passionate for Russia and the United States to not abandon the treaty.

“I am being asked whether I feel bitter watching the demise of what I worked so hard to achieve,” the Russian statesman wrote. “But this is not a personal matter. Much more is at stake.”

“A new arms race has been announced,” he continued. “The I.N.F. Treaty is not the first victim of the militarization of world affairs. In 2002, the United States withdrew from the Antiballistic Missile Treaty; this year, from the Iran nuclear deal. Military expenditures have soared to astronomical levels and keep rising.”

Indeed, military spending has risen dramatically under Trump as tax cuts for the rich drain the Treasury and put further stress on the rest of us to pay the staggering bill while Republicans use deficits they caused as an excuse to attack social safety net programs such as Medicare and Social Security.

And as Trump continues to weaken NATO and fawns over dictators while ignoring human rights, a third global conflict seems right around the corner.

Gorbachev pointed out that Russia and the United States can still work together to reduce the threat of nuclear weapons, but warned that Trump is destroying the foundation of international cooperation and security that has been built since World War II.

With enough political will, any problems of compliance with the existing treaties could be resolved. But as we have seen during the past two years, the president of the United States has a very different purpose in mind. It is to release the United States from any obligations, any constraints, and not just regarding nuclear missiles.

The United States has in effect taken the initiative in destroying the entire system of international treaties and accords that served as the underlying foundation for peace and security following World War II.

Keep in mid that Gorbachev understands what’s at stake. After all, he helped craft the treaty and served as the leader of the Soviet Union at the end of the Cold War, an era when people throughout the world grew up fearing nuclear annihilation. Disarmament treaties were meant to reduce that fear. But Trump is bringing the fear back, and he’s unstable and petty enough that he may actually use nuclear weapons.

Gorbachev still has hope, and observed that no one wins a nuclear war.

“I am convinced that those who hope to benefit from a global free-for-all are deeply mistaken,” he wrote. “There will be no winner in a “war of all against all” — particularly if it ends in a nuclear war. And that is a possibility that cannot be ruled out. An unrelenting arms race, international tensions, hostility and universal mistrust will only increase the risk.”

Not only did he conclude by calling upon Russia to issue a “balanced” response to Trump’s actions, he urged the United Nations and America’s allies to stand up to Trump on this issue for the sake of international peace and survival.

Is it too late to return to dialogue and negotiations? I don’t want to lose hope. I hope that Russia will take a firm but balanced stand. I hope that America’s allies will, upon sober reflection, refuse to be launchpads for new American missiles. I hope the United Nations, and particularly members of its Security Council, vested by the United Nations Charter with primary responsibility for maintaining international peace and security, will take responsible action.

Faced with this dire threat to peace, we are not helpless. We must not resign, we must not surrender.

If only we had a president who understood what’s at stake instead of one who treats nuclear weapons as toys he can use to make threats and extract demands in a futile effort to make himself look more powerful. If American voters want to stop Trump and potential future nuclear fallout, they need to vote in November for a Congress that will check his power and put an end to this madness.