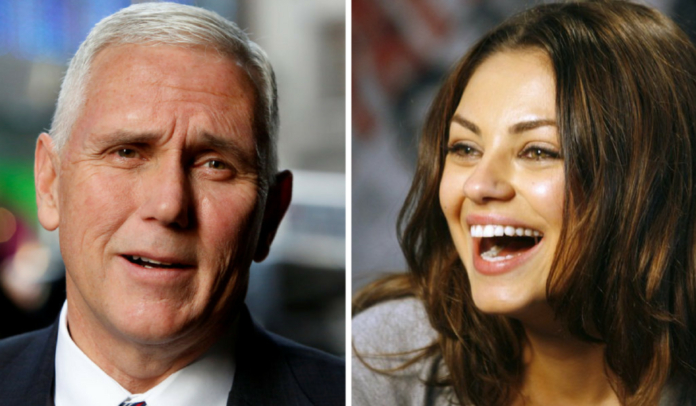 On Thursday, the actress Mila Kunis, the star of Bad Moms, revealed the fabulous prank she has been pulling monthly on Vice President Mike Pence.

Mila Kunis, in an appearance on “Conan,” told Conan and the television audience that she chose a productive means of protesting Pence’s positions on women with which she disagrees.

What has she been doing? She set up a monthly donation to Planned Parenthood in the staunchly pro-life Vice President’s name. She also sends the Vice President a thank you letter, every month, for his donation.

Kunis said in the interview, “I disagreed with some of the stuff that Pence was doing and was trying to do. And so, as a reminder that there are women in the world that may or may not agree with his platform, I put him on a list of reoccurring donations that are made in his name to Planned Parenthood.”

She continued saying, “Every month, to his office, he gets a little letter that says ‘an anonymous donation has been made in your name. I don’t look at it as a prank. I look at it just as, I strongly disagree [with him], and this is my little way of showing it.”

Kunis is a Democrat who has supported progressive causes and was a supporter of former President Obama.

The gesture is one that would likely be quite unwelcome by the Vice President. Mike Pence is a champion of far-right anti-abortion activists. He cast a tie-breaking vote in the Senate in March that moved forward a proposal to end a rule instituted by former President Obama. The rule made states unable to defund health-care providers for political reasons.

He has mad being anti-abortion, and anti-woman, a central theme of his political career, a position he has carried with him to the White House. While the President’s pro-life credentials might be lacking for many conservatives, Mike Pence is the poster boy for anti-abortion politics.