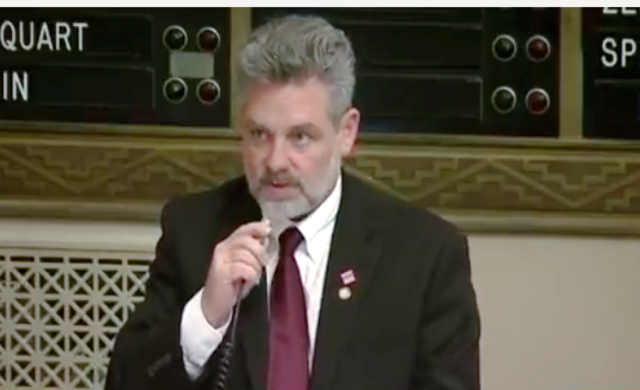 A Minnesota Republican who serves in the state legislature is in very hot water for remarks he made at a gun owners caucus meeting at the capitol on over the weekend suggesting that those who propose gun control measures should be violently murdered.

Rep. Cal Bahr told those gathered for the meeting that he was opposed to two gun control proposals that will be introduced for passage by the Minnesota House of Representatives:

“There’s a lot of us in this room that have had enough, and it’s time to start riding herd on the rest of these people that want to take your rights away from you. They will not go quietly into the good night. They need to be kicked to the curb and stomped on and run over a few times.”

“Bahr is a member of the New House Republicans caucus, a group that recently broke off from the House GOP caucus. He is a small-business owner serving his second term”

“Encouraging violence endangers our communities and undermines our democracy, particularly when the statement is made by an elected official. While heated debates are a healthy part of the political process, this type of language is unacceptable and demands condemnation from people of all political parties.”

Gun owners and gun rights’ advocates love to say that guns don’t kill people, guns do, yet here we have an elected official urging that violence be carried out against anyone who dares to disagree with him.

The simple fact is that it’s never been easier for just about anyone to purchase as many weapons of mass murder as they choose, and with Republicans eternally subservient to the gun lobby, it likely will be for decades to come.