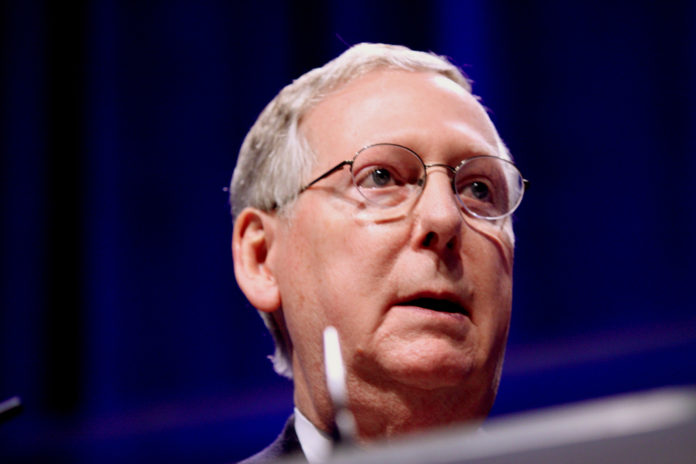 Now that he knows Democrats are fully in control of the House of Representatives and he can’t pass any legislation without their help, Senate Majority Leader Mitch McConnell (R-KY) is worried that his Democratic colleagues may not be in any mood to cooperate with him or the GOP, which could doom Republicans heading into 2020.

In an op-ed he wrote for Fox News, McConnell begins by tooting his party’s horn, asserting that they’ve accomplished a great deal in President Donald Trump’s first two years in office:

“So make no mistake. The Senate has proven its ability to reach bipartisan solutions to some of the most pressing challenges facing our nation.

“And looking ahead to the coming year, there will be no shortage of opportunities to continue this impressive record of cooperation across the aisle and across the Capitol.”

My latest Op-Ed: Will Dems work with us, or simply put partisan politics ahead of the country? https://t.co/X4IwYUedTE

McConnell then asks this loaded question, conveniently overlooking the obstructionism he and the GOP engaged in for eight years under former President Barack Obama:

“What we can make of those opportunities will depend on our Democratic colleagues. Will they choose to go it alone and simply make political points? Or will they choose to work together and actually make a difference?”

Really, Mitch? You have the nerve to suggest Democrats will try to “make political points” when you refused to even hold hearings on President Obama’s Supreme Court nominee, Merrick Garland? Wow! Talk about hypocritical. He’s also the same Mitch McConnell who said in 2010:

“The single most important thing we want to achieve is for President Obama to be a one-term president.”

The internet quickly joined the conversation, reminding McConnell of his past deeds:

This is truly the most brain dead op-ed ever? Does Mitch McConnnell @senatemajldr actually think that people are stupid? He has run roughshod over Dems the last two years, and now HE is saying will they “put partisan politics ahead of the country?” This ain’t worth reading. NEXT! https://t.co/kXtkwf20wI

Hypocrisy thy name is McConnell. pic.twitter.com/tRmG3ZzJDa

Mitch, sit down and shut the hell up. No one is in the mood for any of your nonsense.

Merrick Garland. Remember how fairly you treated him ? Remember promising to do anything to make Pres. Obama a one term president even if it brought down the country ? Well, Mitch, we remember,and we can’t wait to vote you out of office, to save the country.

Hahahaha!!!! That smells like a man who knows the end is coming soon.

Says the man who did everything in his partisan power for 8 years to put his party ahead of country, and not to work with former President Obama. The hypocrisy, it burns.